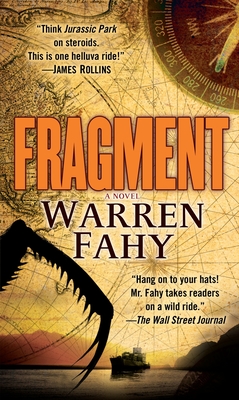 “If you are looking for the heir to Michael Crichton, look no further than Warren Fahy. This gruesome and fascinating debut highlights cutting-edge science and time-tested action as we go exploring the genetic cesspool that is Henders Island. A great summer read.”
— Katie Glasgow, Mitchell Books, Fort Wayne, IN
View the List

Aboard a long-range research vessel, in the vast reaches of the South Pacific, the cast and crew of the reality show Sealife believe they have found a ratings bonanza. For a director dying for drama, a distress call from Henders Island—a mere blip on any radar—might be just the ticket. Until the first scientist sets foot on Henders—and the ultimate test of survival begins.

For when they reach the island’s shores, the scientists are utterly unprepared for what they find—creatures unlike any ever recorded in natural history. This is not a lost world frozen in time; this is Earth as it might have looked after evolving on a separate path for half a billion years—a fragment of a lost continent, with an ecosystem that could topple ours like a house of cards.

Praise For Fragment: A Novel…

“Showcases the talents of a new novelist with a flair for forward-charging narrative. The details seem brilliantly researched, and the observations could be those of a sharp-minded student of biology.”—Dallas Morning News

Warren Fahy has been a bookseller, a statistical analyst, and managing editor of a video database, where he wrote hundreds of movie reviews for a nationally syndicated column. He is currently the lead writer for Wowwee, generating creative content for their line of advanced robotic toys. He lives in San Diego, California. Delacorte will publish his next novel in 2010.
Loading...
or
Not Currently Available for Direct Purchase