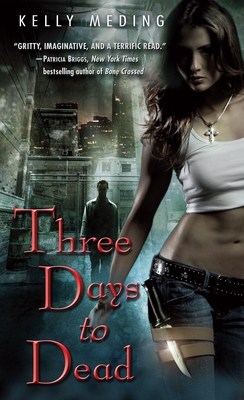 When Evangeline Stone wakes up naked and bruised on a cold slab at the morgue—in a stranger’s body, with no memory of who she is and how she got there—her troubles are only just beginning. Before that night she and the two other members of her Triad were the city’s star bounty hunters, mercilessly cleansing the city of the murderous creatures living in the shadows, from vampires to shape-shifters to trolls. Then something terrible happened that not only cost all three of them their lives but also convinced the city’s other Hunters that Evy was a traitor—and she can’t even remember what it was.

Now she’s a fugitive, piecing together her memory, trying to deal some serious justice—and discovering that she has only three days to solve her own murder before the reincarnation spell wears off. Because in three days Evy will die again—but this time there’s no second chance. . . .

“Three Days to Dead is one of the best books I’ve read. Ever. Evy Stone is a heroine’s heroine, and I rooted for her from the moment I met her. Kelly Meding has written a phenomenal story, one that’s fast-paced, gritty, and utterly addictive. Brava! More! More! More!”—Jackie Kessler, co-author of Black and White

A native of the Delaware seashore, Kelly Meding briefly attempted life in the bustle of the Northern Virginia/DC Metro area, before retreating back to the relative quiet of the Eastern Shore. She lives in a small town near the beach, with a neurotic cat who occasionally meows at ghosts. Kelly received her Bachelor's Degree in Communication in 2002 and she hasn't used it since, preferring instead to wile away her non-writing hours on the sales floor of a national retail chain. After discovering Freddy Krueger at a very young age, Kelly began a lifelong obsession with horror, science fiction, and fantasy, on which she blames her interest in vampires, psychic powers, superheroes, and all things paranormal. When not writing, she can be found crafting jewelry, enjoying a good cup of coffee, or scouring the Internet for gossip on her favorite television shows.
Loading...
or
Not Currently Available for Direct Purchase