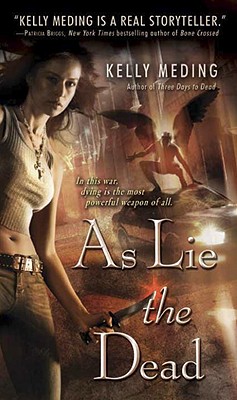 Evangeline Stone, a rogue bounty hunter, never asked for a world divided between darkness and light . . .

. . . or the power to die and live again in someone else’s borrowed body. After a murder plot meant to take her out leaves an entire race of shapeshifters nearly extinct, Evy is gnawed by guilt. So when one of the few survivors of the slaughter enlists her aid, she feels duty-bound to help—even though protecting a frail, pregnant shifter is the last thing Evy needs, especially with the world going to hell around her.

Amid weres, Halfies, gremlins, vamps—and increasingly outgunned humans—a war for supremacy is brewing. With shifters demanding justice, her superiors desperate to control her, and an assassin on her trail, Evy discovers a horrifying conspiracy. And she may be the only person in the world who can stop it—unless, of course, her own side gets her first.

A native of the Delaware seashore, Kelly Meding briefly attempted life in the bustle of the Northern Virginia/DC Metro area, before retreating back to the relative quiet of the Eastern Shore.  She lives in a small town near the beach, with a neurotic cat who occasionally meows at ghosts.  Kelly received her Bachelor's Degree in Communication in 2002 and she hasn't used it since, preferring instead to wile away her non-writing hours on the sales floor of a national retail chain.  After discovering Freddy Krueger at a very young age, Kelly began a lifelong obsession with horror, science fiction, and fantasy, on which she blames her interest in vampires, psychic powers, superheroes, and all things paranormal.  When not writing, she can be found crafting jewelry, enjoying a good cup of coffee, or scouring the Internet for gossip on her favorite television shows.
Loading...
or
Not Currently Available for Direct Purchase