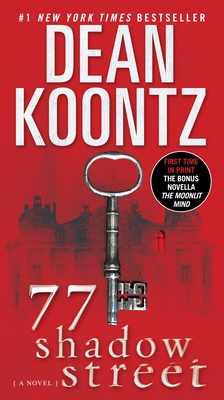 Welcome to the Pendleton. Built as a tycoon’s dream home in the 1880s and converted to luxury condominiums not quite a century later, the Gilded Age palace at the summit of Shadow Hill is a sanctuary for its fortunate residents. Scant traces remain of the episodes of madness, suicide, mass murder—and whispers of things far worse—that have scarred its grandeur almost from the beginning.

But now inexplicable shadows caper across walls, security cameras relay impossible images, phantom voices mutter in strange tongues, not-quite-human figures lurk in the basement, elevators plunge into unknown depths. With each passing hour a terrifying certainty grows: Whatever drove the Pendleton’s past occupants to their unspeakable fates is at work again. And as nightmare visions become real, as a deadly tide begins to engulf them, the people at 77 Shadow Street will find the key to humanity’s future . . . if they can survive to use it.

Includes the bonus novella The Moonlit Mind—first time in print


Praise For 77 Shadow Street (with bonus novella The Moonlit Mind): A Novel (Pendleton #1)…

“One of the master storytellers of this or any age.”—The Tampa Tribune

“A rarity among bestselling writers, Koontz continues to pursue new ways of telling stories, never content with repeating himself. He writes of hope and love in the midst of evil in profoundly inspiring and moving ways.”—Chicago Sun-Times

“A master at spinning dark tales . . . Koontz knows how to dial up the terror.”—Associated Press

“Koontz is a superb plotter and wordsmith. He chronicles the hopes and fears of our time in broad strokes and fine detail, using popular fiction to explore the human condition [and] demonstrating that the real horror of life is found not in monsters, but within the human psyche.”—USA Today

“Koontz . . . is a master storyteller and a daring writer. . . . He gives readers bright hope in a dark world.”—Publishers Weekly (starred review)

“Dean Koontz . . . has the power to scare the daylights out of us.”—People

“Dean Koontz is not just a master of our darkest dreams, but also a literary juggler.”—The Times (London)

Dean Koontz, the author of many #1 New York Times bestsellers, lives in Southern California with his wife, Gerda, their golden retriever, Elsa, and the enduring spirit of their goldens, Trixie and Anna.
Loading...
or support indie stores by buying on
(This book is on backorder)