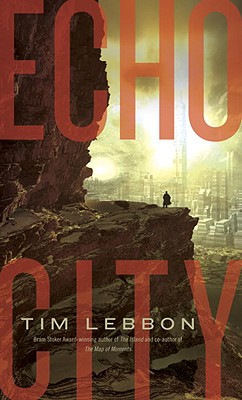 Surrounded by a vast, poisonous desert, Echo City is built upon the graveyard of its own past. Most inhabitants believe that their city and its subterranean Echoes are the whole of the world, but there are a few dissenters. Peer Nadawa is a political exile, forced to live with criminals in a ruinous slum. Gorham, once her lover, leads a ragtag band of rebels against the ruling theocracy. Nophel, a servant of that theocracy, dreams of revenge from his perch atop the city's tallest spire. And beneath the city, a woman called Nadielle conducts macabre experiments in genetic manipulation using a science indistinguishable from sorcery. They believe there is something more beyond the endless desert . . . but what?
It is only when a stranger arrives from out of the wastes that things begin to change. Frail and amnesiac, he holds the key to a new beginning for Echo City--or perhaps to its end, for he is not the only new arrival. From the depths beneath Echo City, something ancient and deadly is rising. Now Peer, Gorham, Nophel, and Nadielle msut test the limits of love and loyalty, courage and compassion, as they struggle to save a city collapsing under the weight of its own history.

“[Tim] Lebbon’s work is infused with the contemporary realism of Stephen King and the lyricism of Ray Bradbury.”—Fangoria

“Lebbon is a master of fantasy and horror and his visions make for disturbing and compelling reading.”—Douglas Clegg

Tim Lebbon is the critically acclaimed, bestselling author of more than twenty-five novels, including The Island, Fallen, Dusk, Dawn, and, with Christopher Golden, Mind the Gap and The Map of Moments. He has won four British Fantasy Awards and a Bram Stoker Award, and several of his books and short stories are in development as movies. He lives in South Wales with his wife and two children.
or
Not Currently Available for Direct Purchase