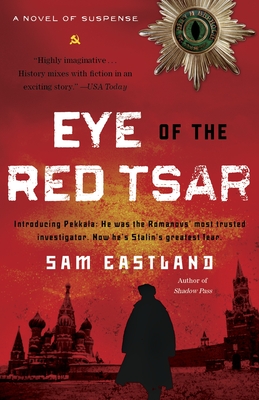 Eye of the Red Tsar

A Novel of Suspense (Inspector Pekkala #1)

Shortly after midnight on July 17, 1918, the imprisoned family of Tsar Nicholas Romanov was awakened and led down to the basement of the Ipatiev house. There they were summarily executed. Their bodies were hidden away, the location a secret of the Soviet state. A decade later, Pekkala, once the most trusted secret agent of the Romanovs, is now Prisoner 4745-P, banished to a forest on the outskirts of humanity. But the state needs Pekkala one last time. His mission: catch the assassins who slaughtered the Romanovs, locate the royal child rumored to be alive, and give Stalin the international coup he craves. Find the bodies, Pekkala is told, and you will find your freedom.

In a land of uneasy alliances and lethal treachery, pursuing clues that have eluded everyone, Pekkala is thrust into the past where he once reigned. There he will meet the man who betrayed him and the woman he loved and lost in the fires of rebellion—and uncover a secret so shocking that it will shake to its core the land he loves.

Praise For Eye of the Red Tsar: A Novel of Suspense (Inspector Pekkala #1)…

“In the tradition of Martin Cruz Smith and Tom Rob Smith, Sam Eastland pulls us into the culture and politics of Mother Russia. . . . Highly imaginative [and] exciting.”—USA Today

“A fantastic premise, frenetic action sequences and a stellar setting would all set apart this debut novel by [Sam] Eastland. . . . What elevates this Russian period thriller . . . is its mad, brilliant hero.”—Kirkus Reviews (starred review)

“A riveting historical thriller with a fascinating protagonist . . . a smart, assured, impeccably researched page-turner.”—David Liss, author of The Devil’s Company

“A triumph! With a canny eye for detail, Eastland re-creates the tragedy of the Romanov dynasty in this intelligent and relentless thriller.”—David Hewson, author of City of Fear

“A terrific debut . . . Eastland’s weaving of fact and fiction, of real and invented characters, is brilliantly achieved.”—The Times (London)

Sam Eastland lives in the United States and the United Kingdom. He is the grandson of a London police detective who served in Scotland Yard’s famous “Ghost Squad” during the 1940s. He is currently at work on his next Pekkala novel, which Bantam will publish in 2011.
Loading...
or
Not Currently Available for Direct Purchase