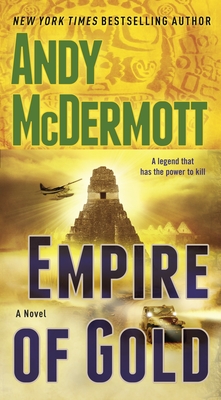 A RUMOR OF RICHES. A MAZE OF MURDER. AND THE WORLD’S MOST DANGEROUS, SOUGHT-AFTER PRIZE.

Nina Wilde and Eddie Chase possess extraordinary pieces of an ancient puzzle that leads them from Singapore to the jungles of South America. Inside a storm of political and drug warfare, Nina is getting close to one of history’s greatest secrets: the mythical golden city of El Dorado. As one discovery unveils another, Nina realizes that a legendary Incan leader made a deal with his Spanish captors—and hid forever the real El Dorado. Now, Nina and Eddie face a maze of death traps and betrayals, including one that reaches into Eddie’s past in Afghanistan, even into his own family in England. Behind a waterfall in Peru is an unfound wonder of the world. And to get there, Nina and Eddie may have to sacrifice everything: their friends, their love for one another, even their lives.

Praise For Empire of Gold: A Novel (Nina Wilde and Eddie Chase #7)…

“No fan of Indiana Jones, Matthew Reilly or action in general will be able to put it down.”—Northern Territory News, on The Pyramid of Doom

“Raises the bar to please adventure junkies who prefer to mainline their action.”—Publishers Weekly (starred review), on The Hunt for Atlantis

Andy McDermott is a former journalist and movie critic who now writes novels full-time following the international success of his debut thriller, The Hunt for Atlantis,which has been sold around the world in more than twenty languages. He is also the author of The Tomb of Hercules, The Secret of Excalibur, The Covenant of Genesis, The Pyramid of Doom, The Sacred Vault, Empire of Gold, Return to Atlantis, The Valhalla Prophecy, and The Shadow Protocol. He lives in Bournemouth, England.
Loading...
or support indie stores by buying on