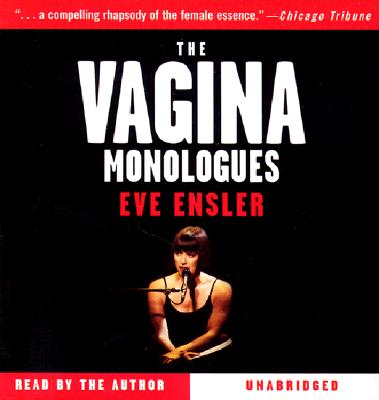 Performed by the author

A poignant and hilarious tour of the last frontier, the ultimate forbidden zone, The Vagina Monologues is a celebration of female sexuality in all its complexity and mystery. In this stunning phenomenon that has swept the nation, Eve Ensler gives us real women's stories of intimacy, vulnerability, and sexual self-discovery.

Celebrated as the bible for a new generation of women, The Vagina Monologues has been performed in cities all across America and at hundreds of college campuses. It has inspired a dynamic grassroots movement—V-Day—to stop violence against women. Witty and irreverent, compassionate and wise, Eve Ensler's Obie Award-winning masterpiece gives voice to women's deepest fantasies and fears, guaranteeing that no one who reads it will ever look at a woman's body, or think of sex, in quite the same way again.

Included in this special edition are testimonials—both joyous and heartbreaking—from young women who have performed The Vagina Monologues at their colleges for V-Day, February 14, to raise money for organizations fighting to protect women.

Praise For The Vagina Monologues…

"Women have entrusted Eve with their most intimate experiences, from sex to birthing. . . . I think readers, men as well as women, will emerge from these pages feeling more free within themselves—and about each other."         —Gloria Steinem

"Eve Ensler is the Pied Piper. She is leading women and the world to a different
consciousness of the essence of women."         —Gillian Anderson

"I feel my life has changed. You don't just hook up with Eve, you become part of her crusade. There's a corps of us who are Eve's army."         —Glenn Close

"The monologues are part of Eve Ensler's crusade to wipe out the shame and embarrassment that many women still associate with their bodies or their sexuality. . . . They are both a celebration of women's sexuality and a condemnation of its violation."
—The New York Times

"Spellbinding, funny, and almost unbearably moving. . . . Written with a bluntness that is nevertheless intensely lyrical, it is both a work of art and an incisive piece of cultural history, a poem and a polemic, a performance and a balm and a benediction."         —Variety