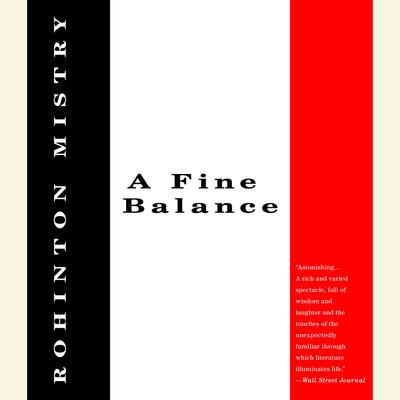 With a compassionate realism and narrative sweep that recall the work of Charles Dickens, this magnificent novel captures all the cruelty and corruption, dignity and heroism, of India. The time is 1975. The place is an unnamed city by the sea. The government has just declared a State of Emergency, in whose upheavals four strangers--a spirited widow, a young student uprooted from his idyllic hill station, and two tailors who have fled the caste violence of their native village--will be thrust together, forced to share one cramped apartment and an uncertain future.

As the characters move from distrust to friendship and from friendship to love, A Fine Balance creates an enduring panorama of the human spirit in an inhuman state.

Rohinton Mistry was born in Bombay and now lives near Toronto. His first novel, Such a Long Journey, was shortlisted for the Booker Prize and received, among other awards, the Governor General's Award and the Commonwealth Writers Prize for Best Book of the Year. A Fine Balance is his second novel, winner of the Los Angeles Times Book Prize in Fiction, the Giller Prize, and the Commonwealth Writers Prize as well as a Booker Prize finalist. Mistry is also the author of Swimming Lessons, a collection of short stories.