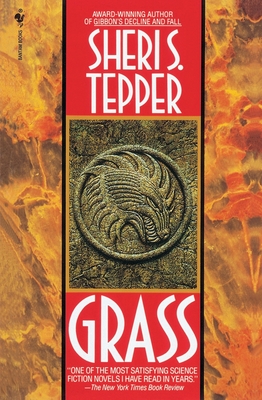 “One of the most satisfying science fiction novels I have read in years.”—The New York Times Book Review

Here is a novel as original as the breathtaking, unspoiled world for which it is named, a place where all appears to be in idyllic balance. Generations ago, humans fled to the cosmic anomaly known as Grass. Over time, they evolved a new and intricate society. But before humanity arrived, another species had already claimed Grass for its own. It, too, had developed a culture. . . .

Now, a deadly plague is spreading across the stars. No world save Grass has been left untouched. Marjorie Westriding Yrarier has been sent from Earth to discover the secret of the planet’s immunity. Amid the alien social structure and strange life-forms of Grass, Lady Westriding unravels the planet’s mysteries to find a truth so shattering it could mean the end of life itself.

Sheri S. Tepper (1929–2016) is the award-winning author of A Plague of Angels, Sideshow, Beauty, Raising the Stones, Grass, The Gate to Women's Country, After Long Silence, and Shadow's End. Grass was a New York Times Notable Book and Hugo Award nominee, and Beauty was voted Best Fantasy Novel by the readers of Locus magazine.
or support indie stores by buying on