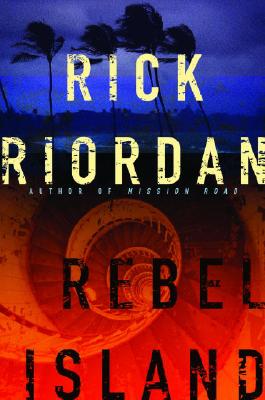 Triple-crown winner of mystery’s most coveted awards—the Edgar, the Anthony, and the Shamus—Rick Riordan and his Texas-style take on the crime novel have never been bigger or darker than in this latest Tres Navarre thriller. This time Navarre faces a killer as unstoppable as a force of nature.

Tres Navarre had given up private investigation—and with it a violent past that had buried too many friends. Newly married, with a baby on the way, it was time to find a safer line of work. He and Maia had come to Rebel Island to celebrate their honeymoon and a new future. But no sooner had they arrived than a reminder of the past showed up in the form of a corpse shot dead in room 12.

Just like that Tres finds himself flashing back on the memory of a grim childhood summer spent on the island—a summer that changed everything in his life. A summer he could never forget but never entirely remember either. And when a second corpse turns up, it’s clear to Tres that the past is not dead and buried after all, but is stalking Rebel Island with unfinished business of its own.

What really happened that long-ago summer, what dark secrets were kept, and who has come back to avenge them…these are the questions Tres, his brother Garrett, and the very pregnant Maia must answer—and time is running out. For a monster hurricane is about to hit Rebel Island, cutting them off from the mainland and leaving them trapped on a flooding island with the hotel’s remaining guests brutally dying one by one. Tres knows better than anyone that the bloodlines of South Texas are as twisted as barbed wire. This time they’re guarding a revelation that can turn his dreams of happily ever after into the ultimate nightmare.

“A potent concoction of humor and suspense in a novel that is as refreshing as a Sunday-afternoon Bloody Mary.” —San Antonio Express-News

In Rick Riordan’s case, believe the hype. He really is that good.” —Dennis Lehane