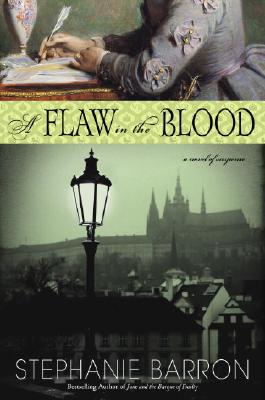 A Flaw in the Blood

The acclaimed author of the bestselling Jane Austen mysteries brings rich historical immediacy to an enthralling new suspense novel centered around Queen Victoria’s troubled court…and a secret so dangerous, it could topple thrones.

Windsor Castle, 1861. For the second time in over twenty years, Irish barrister Patrick Fitzgerald has been summoned by the Queen. The first time, he’d been a zealous young legal clerk, investigating what appeared to be a murderous conspiracy against her. Now he is a distinguished gentleman at the top of his profession. And the Queen is a woman in the grip of fear. For on this chilly night, her beloved husband, Prince Albert, lies dying.

With her future clouded by grief, Fitzgerald can’t help but notice the Queen is curiously preoccupied with the past. Yet why, and how he can help, is unclear. His bewilderment deepens when the royal coach is violently overturned, nearly killing him and his brilliant young ward, Dr. Georgiana Armistead, niece of the late Dr. Snow, a famed physician who’d attended none other than Her Majesty.

Fitzgerald is sure of one thing: the Queen’s carriage was not attacked at random—it was a carefully chosen target. But was it because he rode in it? Fitzgerald won’t risk dying in order to find out. He’ll leave London and take Georgiana with him—if they can get out alive. For soon the pair find themselves hunted. Little do they know they each carry within their past hidden clues to a devastating royal secret…one they must untangle if they are to survive.

From the streets of London to the lush hills of Cannes, from the slums of St. Giles to the gilded halls of Windsor Castle, A Flaw in the Blood delivers a fascinating tale of pursuit, and the artful blend of period detail and electrifying intrigue that only the remarkable Stephanie Barron can devise.


Praise For A Flaw in the Blood…


“An enquiry into the death of Queen Victoria’s beloved Prince Consort…. Intertwined with information about medical malpractive 150 years ago and royal genealogy.”—Kirkus Reviews

“[A] beautifully written novel, filled with twists and turns…. You’ll smell the scented chambers at Windsor and the filth in the hovel, along with the Victorian hypocrisy. And you will be so caught up in the characters that you'll wish Barron would turn Georgie and Patrick into a series, just as she did with Jane Austen.”—Denver Post

“A thrilling chase through Europe with plenty of action and…. The stunning conclusion will leave you wondering about the course of British history.”—Rocky Mountain News