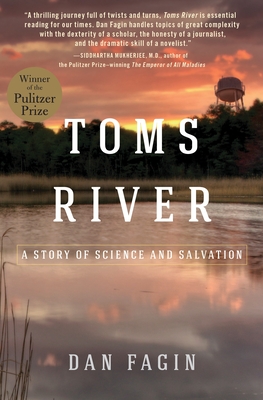 A Story of Science and Salvation

The riveting true story of a small town ravaged by industrial pollution, Toms River melds hard-hitting investigative reporting, a fascinating scientific detective story, and an unforgettable cast of characters into a sweeping narrative in the tradition of A Civil Action, The Emperor of All Maladies, and The Immortal Life of Henrietta Lacks.

One of New Jersey’s seemingly innumerable quiet seaside towns, Toms River became the unlikely setting for a decades-long drama that culminated in 2001 with one of the largest legal settlements in the annals of toxic dumping. A town that would rather have been known for its Little League World Series champions ended up making history for an entirely different reason: a notorious cluster of childhood cancers scientifically linked to local air and water pollution. For years, large chemical companies had been using Toms River as their private dumping ground, burying tens of thousands of leaky drums in open pits and discharging billions of gallons of acid-laced wastewater into the town’s namesake river.

In an astonishing feat of investigative reporting, prize-winning journalist Dan Fagin recounts the sixty-year saga of rampant pollution and inadequate oversight that made Toms River a cautionary example for fast-growing industrial towns from South Jersey to South China. He tells the stories of the pioneering scientists and physicians who first identified pollutants as a cause of cancer, and brings to life the everyday heroes in Toms River who struggled for justice: a young boy whose cherubic smile belied the fast-growing tumors that had decimated his body from birth; a nurse who fought to bring the alarming incidence of childhood cancers to the attention of authorities who didn’t want to listen; and a mother whose love for her stricken child transformed her into a tenacious advocate for change.

A gripping human drama rooted in a centuries-old scientific quest, Toms River is a tale of dumpers at midnight and deceptions in broad daylight, of corporate avarice and government neglect, and of a few brave individuals who refused to keep silent until the truth was exposed.

“A thrilling journey full of twists and turns, Toms River is essential reading for our times. Dan Fagin handles topics of great complexity with the dexterity of a scholar, the honesty of a journalist, and the dramatic skill of a novelist.”—Siddhartha Mukherjee, M.D., author of the Pulitzer Prize–winning The Emperor of All Maladies

“Meticulously researched and compellingly recounted . . . It’s every bit as important—and as well-written—as A Civil Action and The Immortal Life of Henrietta Lacks.”—The Star-Ledger

Praise For Toms River: A Story of Science and Salvation…

“It’s high time a book did for epidemiology what Jon Krakauer’s best-selling Into Thin Air did for mountain climbing: transform a long sequence of painfully plodding steps and missteps into a narrative of such irresistible momentum that the reader not only understands what propels enthusiasts forward, but begins to strain forward as well, racing through the pages to get to the heady views at the end. And such is the power of Dan Fagin’s Toms River, surely a new classic of science reporting . . . a sober story of probability and compromise, laid out with the care and precision that characterizes both good science and great journalism.”—The New York Times

“A thrilling journey full of twists and turns, Toms River is essential reading for our times. Dan Fagin handles topics of great complexity with the dexterity of a scholar, the honesty of a journalist, and the dramatic skill of a novelist.”—Siddhartha Mukherjee, M.D., author of the Pulitzer Prize–winning The Emperor of All Maladies

“Immaculate research . . . unstoppable reading . . . Fagin’s book may not endear him to Toms River’s real estate agents, but its exhaustive reporting and honest look at the cause, obstacles, and unraveling of a cancerous trail should be required environmental reading.”—The Philadelphia Inquirer

“Fagin’s meticulously researched and compellingly recounted story of Toms River families struggling to find out what was causing the cancers that claimed their children belongs on the shelf with other environmental/medical mysteries. It’s every bit as important—and as well-written—as A Civil Action and The Immortal Life of Henrietta Lacks.”—The Star-Ledger

“This hard-hitting account of cancer epidemiology in the New Jersey town of Toms River is a triumph.”—Nature

“In an account equal parts sociology, epidemiology, and detective novel, veteran environmental journalist Dan Fagin chronicles the ordeal of this quiet coastal town, which for decades was a dumping ground for chemical manufacturers. Fagin’s compelling book raises broader questions about what communities are willing to sacrifice in the name of economic development.”—Mother Jones

“As Rebecca Skloot’s The Immortal Life of Henrietta Lacks investigated the tragic impact that unethical scientific pursuits had on a family, Toms River unravels the careless environmental practices that damaged a community. . . . Features jaw-dropping accounts of senseless waste-disposal practices set against the inspiring saga of the families who stood up to the enormous Toms River chemical plant. The fate of the town, we learn, revolves around the science that cost its residents so much.”—Booklist

“A crisp, hard-nosed probe into corporate arrogance and the power of public resistance makes this environmental caper essential reading.”—Publishers Weekly

“Toms River is an epic tale for our chemical age. Dan Fagin has combined deep reporting with masterful storytelling to recount an extraordinary battle over cancer and pollution in a New Jersey town. Along the way—as we meet chemists, businessmen, doctors, criminals, and outraged citizens—we see how Toms River is actually a microcosm of a world that has come to depend on chemicals without quite comprehending what they might do to our health.”—Carl Zimmer, author of A Planet of Viruses and Parasite Rex

“At once intimate and objective, Toms River is the heartbreaking account of one town’s struggle with a legacy of toxic pollution. Dan Fagin has written a powerful and important book.”—Elizabeth Kolbert, author of Field Notes from a Catastrophe

“This book is required phys. ed., a plunge into one of the uglier pits of the world we are manufacturing.”—Charleston Post and Courier

“A surprisingly exciting tour through the yawning gap that separates cause from effect. Toms River will fill you with outrage: at the blatant abuses of the bad old days, the weak response of government and—worst of all—the knowledge that it could, and most likely will, happen again.”—OnEarth

“Deeply and thoroughly researched, it’s a gripping, beautifully told, and thought-provoking account of a human tragedy. . . . Fagin weaves a tight, compelling narrative that exerts an almost novelistic pull on the reader. . . . An important book.”—Chemical & Engineering News

“An engaging and well-documented exposé about chemical contamination and the discovery of a cancer cluster . . . Toms River is a cautionary tale about the Faustian tradeoffs between unfettered economic growth and industrial pollution.”—New Jersey Monthly

“The complete tale of twentieth-century environmental calamity told in brilliant microcosm as if it were a le Carré spy thriller peopled with a cast of Dickensian characters you’d find in a John Irving novel—from shady waste haulers to reluctant-hero parents . . . The result is remarkable, a landmark page-turner that’s part science, part history, part comedy, and pure tragedy. It’s also one of the most illuminating, engaging, and deliciously readable books that I’ve encountered in a long while, period.”—Before It’s News

Dan Fagin is an associate professor of journalism and the director of the Science, Health, and Environmental Reporting Program at New York University’s Arthur L. Carter Journalism Institute. For fifteen years, he was the environmental writer at Newsday, where he was twice a principal member of reporting teams that were finalists for the Pulitzer Prize. His articles on cancer epidemiology were recognized with the Science Journalism Award of the American Association for the Advancement of Science and the Science in Society Award of the National Association of Science Writers.
Loading...
or
Not Currently Available for Direct Purchase