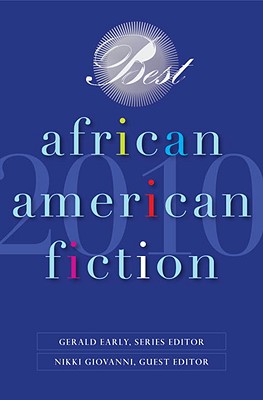 Bursting with energy and innovation, the second volume in the annual anthology collects the year's best short stories by African American authors.

Dealing with all aspects of life, from the pain of war to the warmth of family, the superb tales in Best African American Fiction 2010 are a tribute to the stunning imaginations thriving in today's African American literary community. Chosen by this year's guest editor, the legendary Nikki Giovanni, these works delve into international politics and personal histories, the clash of armies and of generations—and come from such publications as The New Yorker, Harper's, The Kenyon Review, and Callaloo.

In "Ghosts," Edwidge Danticat portrays an aspiring radio talk show host in Bel Air—which some call the Baghdad of Haiti—who is brutally scapegoated, and in "Three Letters, One Song & a Refrain," Chris Abani gives a searing account of the violent life of a thirteen-year-old member of a Burmese hill tribe. Jeffery Renard Allen dramatizes the mysterious arrival in Harlem of a child's hated grandmother, and Wesley Brown fictionalizes the life of the great saxophonist Coleman Hawkins, with cameo appearances by Louis Armstrong, Fletcher Henderson, and other immortals. John Edgar Wideman contributes dense and textured "Microstories" that interweave everything from taboo sex acts to Richard Wright's last works to murder in a modern family. Desiree Cooper depicts a debutante from Atlanta moving to Detroit, "a city where there's no place to hide," while in "Been Meaning to Say," by Amina Gautier, a widower gets an unforgettable holiday visit from his resentful daughter.

From Africa to Philadelphia, from the era of segregation to the age of Obama, the times and places, people and events in Best African American Fiction 2010 reveal inconvenient truths through incomparable fiction.

Gerald Early, a noted essayist and cultural critic, is a professor of English, African, and African American Studies and American Culture Studies at Washington University in St. Louis. He is the author of several books, including The Culture of Bruising, which won the 1994 National Book Critics Circle Award for criticism.
Loading...
or
Not Currently Available for Direct Purchase