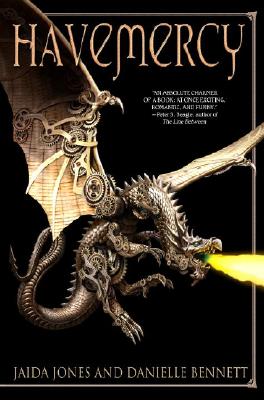 This stunning epic fantasy debut introduces two exciting new authors—and a world brimming with natural and man-made wonders, extraordinary events, and a crisis that will test the mettle of men, the boundaries of magic, and the heart and soul of a kingdom.


Thanks to its elite Dragon Corps, the capital city of Volstov has all but won the hundred years’ war with its neighboring enemy, the Ke-Han. The renegade airmen who fly the corps’s mechanical, magic-fueled dragons are Volstov’s greatest weapon. But now one of its more unruly members is at the center of the city’s rumor mill, causing a distraction that may turn the tide of victory.

With Volstov immersed in a scandal that may have international repercussions, the Ke-Han devise an ingenious plan of attack. To counter the threat, four ill-assorted heroes must converge to save the kingdom they love: an exiled magician, a naive country boy, a young student—and the unpredictable ace airman who flies the city’s fiercest dragon, Havemercy.

But on the eve of battle, these courageous men will face something that could make the most formidable of warriors hesitate, the most powerful of magicians weak, and the most unlikely of men allies in their quest to rise against it....

Filled with adventure and discovery, treachery and betrayal, Havemercy is a thrill ride to the unexpected—and an unforgettable journey that will linger long after the fire of battle has cleared

"Havemercy is an absolute charmer of a book: at once exciting, romantic, and funny."—Peter S. Beagle, author of The Last Unicorn

"These ladies write like a house on fire, delivering fantasy's most pleasant surprise since Temeraire himself took wing in 2006...An impressive debut."—SFReviews.net

“Delicious!  The characters are unique, entrancing and believable: dinner-party guests you never want to see go home.   I will gladly walk again in this city, now that I know my way around.” —Ellen Kushner, author of The Privilege of the Sword

“[The authors] vividly convey the testosterone-saturated world of fantasy fighter pilots in this fast-paced debut.”—Publishers Weekly