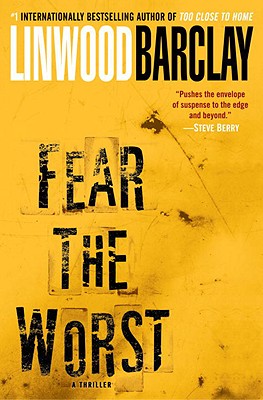 “When Tim's teenage daughter doesn't return home from work, he discovers that the place where she says she's been working doesn't even know her. Thus begins weeks of searching and layers upon layers of intrigue and lies -- which all come to a spine-tingling ending. Barclay, an internationally bestselling author, will soon be a favorite of many here in the U.S. -- guaranteed.”
— Jackie Blem, Tattered Cover Bookstore, Denver, CO
View the List

Your daughter doesn’t come home one night from her summer job.
You go there looking for her. No one’s seen here. But it’s worse than that.
No one’s ever seen her. So where has she been going every day? And where is she now?

In Linwood Barclay’s riveting new thriller, an ordinary man’s desperate search for his daughter leads him into a dark world of corruption, exploitation, and murder. Tim Blake is about to learn that the people you think you know best are the ones harboring the biggest secrets.


Tim is an average guy. He sells cars. He has an ex-wife. She’s moved in with a man whose moody son spends more time online than he should. His girlfriend is turning out to be a bit of a flake. It’s not a life without hassles, but nothing will prepare Tim for the nightmare that’s about to begin.

Sydney vanishes into thin air. At the hotel where she supposedly worked, no one has ever heard of her. Even her closest friends seem to be at a loss. Now, as the days pass without word, Tim must face the fact that not only is Sydney missing, but that the daughter he’s loved and thought he knew is a virtual stranger.

As he retraces Sydney’s steps, Tim discovers that the suburban Connecticut town he always thought of as idyllic is anything but. What he doesn’t know is that his every move is being watched. There are others who want to find Syd as much as Tim does.

But they’re not planning a Welcome Home party.

The closer Tim comes to the truth, the closer he comes to every parent’s worst nightmare—and the kind of evil only a parent’s love has a chance in hell of stopping.

Praise For Fear the Worst…

“Readers will find themselves desperate to finish just one more page before putting the book down . . . a page-turning thriller that’s intense, compelling, and for the most part, expertly paced.” – Kirkus

“Barclay earns a solid A for his page-turning plot.“—Publishers Weekly

“Barclay's pacing is impeccable…an uncomfortably plausible tale ... a page-turner that keeps the reader guessing until the end.”—Denver Post

“Gripping…Unfold[s] with mounting tension and suspense…believable and scary for being rooted in human-sized characters and laced with saving humor.” –Wall Street Journal