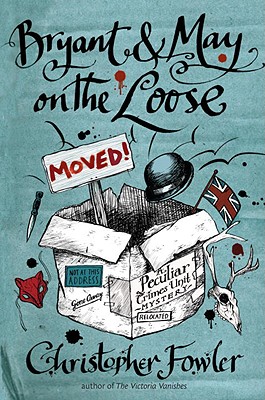 Bryant & May on the Loose

The Peculiar Crimes Unit is no more. After years of defying the odds and infuriating their embarrassed superiors, detectives Arthur Bryant and John May have at last crossed the line. This is the twenty-first century and not even their eccentric genius or phenomenal success rate solving London’s most unusual crimes can save them. While Bryant takes to his bed, his bathrobe, and his esoteric books, the rest of the team take to the streets looking for new careers—leading one of them to stumble upon a gruesome murder.

It isn’t so much the discovery of the headless corpse that’s potentially so politically explosive as where it’s found. Still it takes the bizarre sightings of a great horned creature—half man, half stag—carrying off young women to convince Bryant that this is a case worth getting dressed and leaving the house to solve. The Home Office has reluctantly authorized the PCU to reunite for one last encore performance—in a rented office with no computer network, no legal authority, and a broken toilet. They’ve got until the end of the week to solve a murder with unlikely links to gangland crime, Slavic mythology, the 2012 London Olympics, and the sort of corruption only obscene amounts of money and power can buy.

It’s the kind of case that Bryant and May live to solve—and it could be just the case that kills them.

Praise For Bryant & May on the Loose: A Peculiar Crimes Unit Mystery…

“Fowler offers a distinctive prose style and characters so unusual it is difficult to think of another author’s work this creative.” —Library Journal


"Fowler’s unique blend of the comic and the grotesque is on full display in his excellent seventh Peculiar Crimes Unit mystery.... The pacing, prose, planting of clues and characterizations are all top-notch.”—Publishers Weekly, Starred Review

Chrisopher Fowler is the acclaimed author of fifteen previous novels, including the award-winning Full Dark House and five other Peculiar Crimes Unit mysteries: White Corridor, The Water Room, Seventy-Seven Clocks, Ten Second Staircase, and The Victoria Vanishes. He lives in London, where he is at work on his next Peculiar Crimes Unit novel.
Loading...
or
Not Currently Available for Direct Purchase