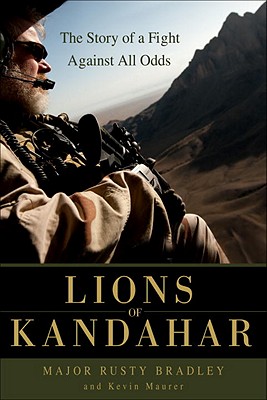 The Story of a Fight Against All Odds

One of the most critical battles of the Afghan War is now revealed as never before. Lions of Kandahar is an inside account from the unique perspective of an active-duty U.S. Army Special Forces commander, an unparalled warrior with multiple deployments to the theater who has only recently returned from combat there.

Southern Afghanistan was slipping away. That was clear to then-Captain Rusty Bradley as he began his third tour of duty there in 2006. The Taliban and their allies were infiltrating everywhere, poised to reclaim Kandahar Province, their strategically vital onetime capital. To stop them, the NATO coalition launched Operation Medusa, the largest offensive in its history. The battlefield was the Panjwayi Valley, a densely packed warren of walled compounds that doubled neatly as enemy bunkers, lush orchards, and towering marijuana stands, all laced with treacherous irrigation ditches. A mass exodus of civilians heralded the carnage to come.

Dispatched as a diversionary force in support of the main coalition attack, Bradley’s Special Forces A-team and two others, along with their longtime Afghan Army allies, watched from across the valley as the NATO force was quickly engulfed in a vicious counterattack. Key to relieving it and calling in effective air strikes was possession of a modest patch of high ground called Sperwan Ghar. Bradley’s small detachment assaulted the hill and, in the midst of a savage and unforgettable firefight, soon learned they were facing nearly a thousand seasoned fighters—from whom they seized an impossible victory.

Now Bradley recounts the whole remarkable story as it actually happened. The blistering trek across Afghanistan’s infamous Red Desert. The eerie traces of the elusive Taliban. The close relations with the Afghan people and army, a primary mission focus. Sperwan Ghar itself: unremitting waves of fire from machine guns and rocket-propelled grenades; a targeted truck turned into an inferno; the death trap of a cut-off compound. Most important: the men, Americans and Afghans alike—the “shaky” medic with nerves of steel and a surgeon’s hands in battle; the tireless sergeant who seems to be everywhere at once; the soft-spoken intelligence officer with laser-sharp insight; the diminutive Afghan commander with a Goliath-sized heart; the cool maverick who risks all to rescue a grievously wounded comrade—each unique, all indelible in their everyday exercise of extraordinary heroism.

Praise for Lions of Kandahar

“A powerful and gripping account of a battle that helped shape the war in Afghanistan . . . With crisp writing and page-turning action, Lions of Kandahar is one of the best books written about the conflict.”—Mitch Weiss, Pulitzer Prize–winning investigative journalist and co-author of Tiger Force: A True Story of Men and War

“One of the most important documents to emerge from the war in Afghanistan.”—The Seattle Times

“Powerful . . . a riveting account of a strategic battle that doesn’t glorify war or focus on heroic deeds . . . Make room on your military bookshelf for Lions of Kandahar.”—San Antonio Express-News

“Bradley takes the reader into battle.”—Time

Major Rusty Bradley was wounded during the Battle of Sperwan Ghar in command of a Special Forces A-team, on his third combat tour as a Special Forces team leader. A native of North Carolina, he graduated from Mars Hill College and enlisted in the Army in 1993, serving as an infantryman for six years before earning his commission from Officer Candidate School in 1999.

Kevin Maurer has been embedded as a reporter with the U.S. Special Forces and 82nd Airborne Division in Afghanistan and Iraq more than a dozen times in the last five years.

Praise For Lions of Kandahar: The Story of a Fight Against All Odds…

“One of the most important documents to emerge from the war in Afghanistan.”—The Seattle Times

“Powerful . . . a riveting account of a strategic battle that doesn’t glorify war or focus on heroic deeds . . . Make room on your military bookshelf for Lions of Kandahar.”—San Antonio Express-News

“Bradley takes the reader into battle.”—Time

“A raw and authentic war story about untamed Green Berets in action. Bradley and Maurer crush it! Mr. President, grab a copy—this is a sure-bet Special Forces exit strategy. Unleash more of these brave lions across Afghanistan and America will win this war.”—Dalton Fury, New York Times bestselling author of Kill Bin Laden: A Delta Force Commander’s Account of the Hunt for the World’s Most Wanted Man

“A powerful and gripping account of a battle that helped shape the war in Afghanistan. But Lions of Kandahar is more than that. Major Rusty Bradley and Kevin Maurer give readers a stirring inside look at the day-to-day operations of a Special Forces team—and what it takes to defeat insurgents hell-bent on regaining control of Afghanistan. With crisp writing and page-turning action, Lions of Kandahar is one of the best books written about the conflict.”—Mitch Weiss, Pulitzer Prize–winning investigative journalist and co-author of the critically acclaimed Tiger Force: A True Story of Men and War

“This is a riveting tale, told from the front lines of the secret war against the Taliban. Lions of Kandahar is the definitive account of a modern Special Forces mission—a must-read for anyone hoping to understand the harsh realities of the Afghan conflict.”—David Zucchino, Pulitzer-Prize-winning journalist and author of Thunder Run: The Armored Strike to Capture Baghdad

“I have read this book three times and I am still chilled to the bone with every word. In Lions of Kandahar you will be riveted by the unabridged action of our real-life military heroes. It took a group of exceptional individuals to accomplish Operation Medusa. We as a nation can only pray we have half the guts and fortitude given selflessly every day on our behalf by the Army Special Forces.”—Marshall R. Teague, actor; U.S. Navy (ret.)

“The war in Afghanistan is made for Special Forces, but very little has been written about these soldiers since the initial attack on Afghanistan in 2001. Bradley and Maurer do a great job of showing how these elite units fight and why they are so important to the battle against the Taliban. Lions of Kandahar is a gripping, moving, and well-told war story.”—Greg Jaffe, Washington Post reporter and co-author of The Fourth Star: Four Generals and the Epic Struggle for the Future of the United States Army
or
Not Currently Available for Direct Purchase
Copyright © 2020 American Booksellers Association