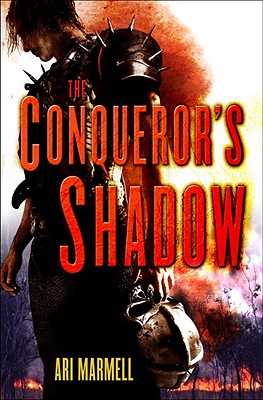 With The Conqueror's Shadow, Ari Marmell brings a welcome seasoning of wit to the genre, proving that dark fantasy can address the enduring questions of good and evil and still retain a sense of humor. Playful yet intense, sharply sarcastic yet deeply sincere, The Conqueror's Shadow announces the appearance of a unique talent and an antihero like no other.
They called him the Terror of the East. His past shrouded in mystery, his identity hidden beneath a suit of enchanted black armor and a skull-like helm, Corvis Rebaine carved a bloody path through Imphallion, aided by Davro, a savage ogre, and Seilloah, a witch with a taste for human flesh. No shield or weapon could stop his demon-forged axe. And no magic could match the spells of his demon slave, Khanda.
Yet just when ultimate victory was in his grasp, Rebaine faltered. His plans of conquest, born from a desire to see Imphallion governed with firmness and honesty, shattered. Amid the chaos of a collapsing army, Rebaine vanished, taking only a single hostage the young noblewoman Tyannon to guarantee his escape.
Seventeen years later, Rebaine and Tyannon are married, living in obscurity and raising their children, a daughter and a son. Rebaine has put his past behind him, given up his dreams of conquest. Not even news of Audriss an upstart warlord following Rebaine's old path of conquest can stir the retired warrior to action.
Until his daughter is assaulted by Audriss's goons.
Now, to rescue the country he once tried to conquer, Rebaine once more dons the armor of the Terror of the East and seeks out his former allies. But Davro has become a peaceful farmer. Seilloah has no wish to leave her haunted forest home. And Khanda . . . well, to describe his feelings for his former master as undying hatred would be an understatement.
But even if Rebaine can convince his onetime comrades to join him, he faces a greater challenge: Does he dare to reawaken the part of him that gloried in cruelty, blood, and destruction? With the safety of his family at stake, can he dare not to?

Praise For The Conqueror's Shadow…

"The Conqueror's Shadow is a powerful fantasy, with well drawn heroes and delightfully wicked, yet complicated, villains. Ari Marmell has made his mark in the genre." –Paul S. Kemp, author of The Erevis Cale Trilogy

"The Conqueror’s Shadow offers readers a tale that begins where most stories end and features a most unlikely protagonist.  Twists of humor leaven this story of desperate people in dangerous times, as a conqueror discovers that perhaps those who live by the sword are sometimes doomed to face the business end of one.  A great mix of character and action." –Robin Hobb, author of Dragon Keeper

"It's not often that a fantasy starts off with the victorious conqueror of a city and a land almost immediately and deliberately vanishing at the height of his victory—but that's exactly what happens with From that decision flows a plot jammed with action, repercussions, a tender love story, and a most humorously intriguing conclusion." –L. E. Modesitt, Jr., author of the Saga of Recluce

"Ari Marmell has a remarkable flair for the sinister." –Scott Lynch, author of The Lies of Locke Lamora

“This dark tale of good and evil still retains a wicked sense of humor.  It’s a heroic fantasy with an intriguing anti-hero and rich, complex secondary characters. The quick pace, action, romance and magical worldbuilding take readers on a page-turning adventure.” —Romantic Times, 4 out of 5 star

“Marmell puts together a wonderful piece of epic fantasy…I have not been so enthused to continue reading a book in a very long time, and The Conqueror's Shadow did that very well.  To say I am excited to read what Ari Marmell has to give us next is an understatement.” –BCS Reviews

“Arock-solid fantasy…filled with darkness and humor. I think fans of Joe Abercrombie, Scott Lynch and Patrick Rothfuss will find Ari Marmell much to their liking. The Conqueror's Shadow is a really fun read and one that I think most fans of dark fantasy will enjoy. Considering, this is Ari Marmell's first novel, I think the future looks very promising for him. I for one look forward to reading his next effort.” –SF Site

“Ari Marmell's The Conqueror's Shadow is an epic fantasy novel with a dark sense of humor.  The world woven here is classic fantasy but with Marmell’s own unique twists.  Captive demons, haunted forests, demon-forged weapons – these ideas have been done before, but in this novel they are received as a breath of fresh air.  The dialogue is witty, the characters are completely fleshed out, and Rebaine’s own history is teased out as the main story progresses.  The ending comes together with a bang, leaving the reader satisfied but still quietly hoping for more.” –Sacramento Book Review

"The Conqueror's Shadow is an entertaining read that fantasy fans won't want to miss.” --NewsOK

"Get's the blood pounding...a book that any fan of epic fantasy will get a lot out of." --Graame's Fantasy Book Review

Avi Marmell has an extensive history of freelance writing, which paid the bills while he worked on improving and publishing his fiction. He has published a fair amount of shared-world fiction, including several short stories and "Agents of Artifice," a Magic: the Gathering novel, but The Conqueror s Shadow" "is his first wholly original published book. Marmell lives in Austin, Texas, with his wife, George, and two cats."
Loading...
or
Not Currently Available for Direct Purchase