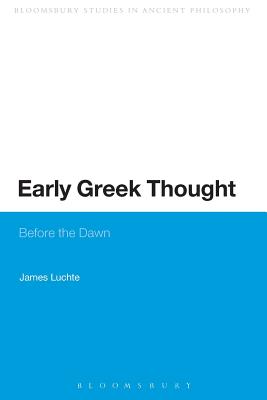 Before the Dawn (Continuum Studies in Ancient Philosophy)

Early Greek Thought calls into question a longstanding mythology - operative in both the Analytic and Continental traditions - that the 'Pre-Socratics had the grandiose audacity to break with all traditional forms of knowledge' (Badiou). Each of the variants of this mythology is dismantled in an attempt to not only retrieve an 'indigenous' interpretation of early Greek thought, but also to expose the mythological character of our own contemporary meta-narratives regarding the 'origins' of 'Western', 'Occidental' philosophy. Using an original hermeneutical approach, James Luchte excavates the context of emergence of early Greek thought through an exploration of the mytho-poetic horizons of the archaic world, in relation to which, as Plato testifies, the Greeks were merely 'children'. Luchte discloses 'philosophy in the tragic age' as a creative response to a 'contestation' of mytho-poetic narratives and 'ways of being'. The tragic character of early Greek thought is unfolded through a cultivation of a conversation between its basic thinkers, one which would remain incomprehensible, with Bataille, in the 'absence of myth' and the exile of poetry.

James Luchte is Lecturer of Philosophy and Programme Co-ordinator of the MA in European Philosophy at the University of Wales, Trinity St. David, in Wales. His other publications include The Peacock and the Buffalo: The Poetry of Nietzsche (translator), Pythagoras and the Doctrine of Transmigration, Heidegger's Early Philosophy: The Phenomenology of Ecstatic Temporality, Nietzsche's Thus Spoke Zarathustra: Before Sunrise (editor) and Kant's Critique of Pure Reason: A Reader's Guide (all Continuum). He has also published numerous articles on various topics in European Philosophy.
Loading...
or support indie stores by buying on