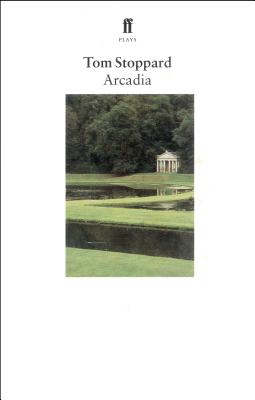 In a large country house in Derbyshire in April 1809 sits Lady Thomasina Coverly, aged thirteen, and her tutor, Septimus Hodge. Through the window may be seen some of the '500 acres inclusive of lake' where Capability Brown's idealized landscape is about to give way to the 'picturesque' Gothic style: 'everything but vampires', as the garden historian Hannah Jarvis remarks to Bernard Nightingale when they stand in the same room 180 years later. Bernard has arrived to uncover the scandal which is said to have taken place when Lord Byron stayed at Sidley Park. Tom Stoppard's absorbing play takes us back and forth between the centuries and explores the nature of truth and time, the difference between the Classical and the Romantic temperament, and the disruptive influence of sex on our orbits in life - 'the attraction', as Hannah says, 'which Newton left out'.

"There's no doubt about it. 'Arcadia' is Tom Stoppard's richest, most ravishing comedy to date, a play of wit, intellect, language, brio and ... emotion. It's like a dream of levitation: you're instantaneously aloft, soaring, banking, doing loop-the-loops and then, when you think you're about to plummet to earth, swooping to a gentle touchdown of not easily described sweetness and sorrow."
--Vincent Canby, The New York Times

Tom Stoppard is the author of more than twenty plays, including, most recently, Rock 'n' Roll. He lives in London.
Loading...
or support indie stores by buying on