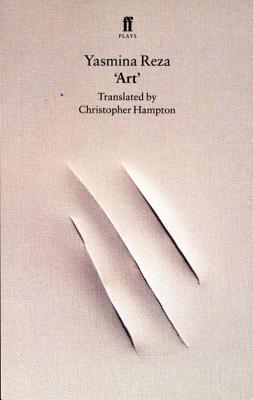 The Tony Award-winning play that focuses on the meaning of art (in the form of a solid white painting) as well as the meaning of friendship, to both the man who bought the painting and the two friends who come to see it."


Praise For Art: A Play…

“This is not some irrelevant fringe production; it is a major intervention in the cultural debate of the country by people who are keen to keep the reactionary tides running. It is probably the most sustained attack on modernism yet seen on the British stage, and it represents a stern challenge to the brilliant success story of British contemporary art.” —The Guardian

“Not only brings to the stage a topical debate, it makes it invigorating, touching and finally disturbing. This dark comedy, translated from the French, in sparkling form, explores its themes through a rift between friends.” —Financial Times

“A remarkably wise, witty and intelligent comedy . . . has touched a universal nerve.” —The Times

“Art, which has been translated from the French by Christopher Hampton, is filled from first curtain to ending with a dazzling array of language.” —Iris Fanger, Christian Science Monitor

“It's an actor's dream, a nonstop cross-fire of crackling language, serious issues of life and art expressed in outbursts that sound like Don Rickles with a degree from the Sorbonne. Brilliantly translated by Christopher Hampton, . . . Art takes that yawny old bore, the play of ideas, and jolts it to life.” —Jack Kroll, Newsweek

Yasmina Reza, born in Paris in 1959, is an acclaimed playwright, screenwriter, and novelist. Her first play, Conversations Après un Enterrement (Conversations After a Burial) won her the 1987 Molière Award for Best Author along with a Johnson Foundation Award and a SACD New Talent Award. Her other works for the theater include Art and The Unexpected Man, among others. She lives in Paris.

Christopher Hampton was born in the Azores in 1946. He wrote his first play, When Did You Last See My Mother?, at the age of eighteen. His many works for the theatre, television and cinema include The Philanthropist, translations of Yasmina Reza's Art, Life x 3, and The Unexpected Man, his adaptation of Les Liaisons Dangereuses by Laclos, translations from Ibsen and Molière, and the screenplays Dangerous Liaisons, Carrington, and The Secret Agent.
Loading...
or
Not Currently Available for Direct Purchase