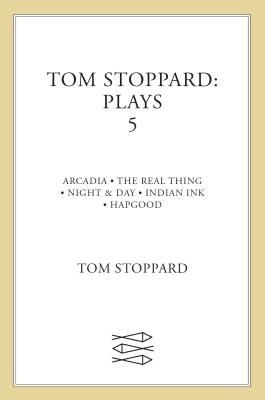 This fifth collection of Tom Stoppard's plays brings together five classic plays by one of the most celebrated dramatists writing in the English language. "Arcadia "received the Evening Standard, the Oliver, and the Critics Awards and "The Real Thing "won a Tony Award.

Arcadia
"I have never left a new play more convinced that I'd just witnessed a masterpiece."--Daily Telegraph

"This is a brilliant, brilliant play. A play of ideas, of consummate theatricality, of sophisticated entertainment and of heartache for time never to be regained."--Sunday Times

The Real Thing
"In The Real Thing he [Stoppard] combines some fly Pirandellian games with an unequivocal statement about the joyousness of shared passion. And the result is the rare thing in the West End (or anywhere else for that matter): an intelligent play about love."--Guardian

Night & Day;
"How excellent it is to leave a theatre thinking as this play makes you think."--Financial Times

Hapgood
"Hapgood is a new variation on one of Stoppard's abiding themes: the black romance of reality and appearance. This is a metaphysical spy-thriller, intricate, elegant, and lucid...for sheer intellectual excitement, Hapgood has no rival."--Sunday Times

Tom Stoppard's other work includes Rosencrantz and Guildenstern Are Dead (Tony Award), Jumpers, Travesties (Tony Award), After Margritte, Enter a Free Man, Hapgood, Indian Ink (a stage adaptation of his own play, In the Native State), and The Invention of Love (Evening Standard Award). His radio plays include If You're Glad I'll Be Frank, Albert's Bridge (Italia Prize), Where are They Now?, Artist Descending a Staircase, The Dog It Was That Died, and and In the Native State (Sony Award). Work for television includes Professional Foul (Bafta Award, Broadcasting Press Guild Award). His film credits include Rosencrantz and Guildenstern Are Dead which he also directed (winner of the Golden Lion, Venice Film Festival).
Loading...
or
Not Currently Available for Direct Purchase