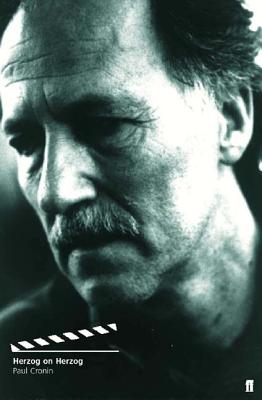 Most of what we've heard about Werner Herzog is untrue. The sheer number of false rumors and downright lies disseminated about the man and his films is truly astonishing. Yet Herzog's body of work is one of the most important in postwar European cinema.
His international breakthrough came in 1973 with Aguirre, The Wrath of God, in which Klaus Kinski played a crazed Conquistador. For The Enigma of Kaspar Hauser, Herzog cast in the lead a man who had spent most of his life institutionalized, and two years later he hypnotized his entire cast to make Heart of Glass. He rushed to an explosive volcanic Caribbean island to film La Soufrière, paid homage to F. W. Murnau in a terrifying remake of Nosferatu, and in 1982 dragged a boat over a mountain in the Amazon jungle for Fitzcarraldo. More recently, Herzog has made extraordinary "documentary" films such as Little Dieter Needs to Fly. His place in cinema history is assured, and Paul Cronin's volume of dialogues provides a forum for Herzog's fascinating views on the things, ideas, and people that have preoccupied him for so many years.

Paul Cronin is a writer and filmmaker. He edited Roman Polanski: Interviews and writes for numerous publications, including Sight and Sound.