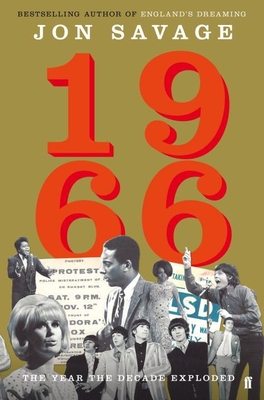 The pop world accelerated and broke through the sound barrier in 1966. In America, in London, in Amsterdam, in Paris, revolutionary ideas slow-cooking since the late '50s reached boiling point. In the worlds of pop, pop art, fashion and radical politics -- often fueled by perception-enhancing substances and literature -- the 'Sixties', as we have come to know them, hit their Modernist peak. A unique chemistry of ideas, substances, freedom of expression and dialogue across pop cultural continents created a landscape of immense and eventually shattering creativity. After 1966 nothing in the pop world would ever be the same. The 7 inch single outsold the long-player for the final time. It was the year in which the ever lasting and transient pop moment would burst forth in its most articulate, instinctive and radical way.
Jon Savage's 1966 is a monument to the year that shaped the pop future of the balance of the century. Exploring canonical artists like The Beatles, The Byrds, Velvet Underground, The Who and The Kinks, 1966 also goes much deeper into the social and cultural heart of the decade through unique archival primary sources.

Jon Savage is the author of England's Dreaming: Sex pistols and Punk Rock and Teenage: The Creation of Youth, 1875-1945. He has written sleeve notes for Wire, St. Etienne and the Pet Shop Boys, among others, and his compilations include: Meridian 1970 (Heavenly/EMI 2005); Queer Noises: From the Closest to the Charts 1961-1976 (Trikont 2006); and Dreams Come True: Classic Electro 1982-87 (Domino 2008).
Loading...
or
Not Currently Available for Direct Purchase