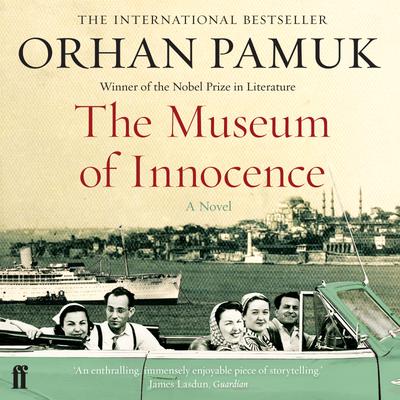 The Museum of Innocence (Digital Audiobook)

The Museum of Innocence - set in Istanbul between 1975 and today - tells the story of Kemal, the son of one of Istanbul's richest families, and of his obsessive love for a poor and distant relation, the beautiful Fusun, who is a shop-girl in a small boutique. In his romantic pursuit of Füsun over the next eight years, Kemal compulsively amasses a collection of objects that chronicles his lovelorn progress-a museum that is both a map of a society and of his heart.
The novel depicts a panoramic view of life in Istanbul as it chronicles this long, obsessive love affair; and Pamuk beautifully captures the identity crisis experienced by Istanbul's upper classes that find themselves caught between traditional and westernised ways of being. Orhan Pamuk's first novel since winning the Nobel Prize is a stirring love story and exploration of the nature of romance.
Pamuk built The Museum of Innocence in the house in which his hero's fictional family lived, to display Kemal's strange collection of objects associated with Fusun and their relationship. The house opened to the public in 2012 in the Beyoglu district of Istanbul.
'Pamuk has created a work concerning romantic love worthy to stand in the company of Lolita, Madame Bovary and Anna Karenina.' --Financial Times

Orhan Pamuk, is the author of many celebrated books, including The White Castle, Istanbul and Snow. In 2003 he won the International IMPAC Award for My Name is Red, and in 2006 he was awarded the Nobel Prize in Literature. His most recent novel, The Museum of Innocence, was an international bestseller, praised in the Guardian as 'an enthralling, immensely enjoyable piece of storytelling.' Orhan Pamuk lives in Istanbul.