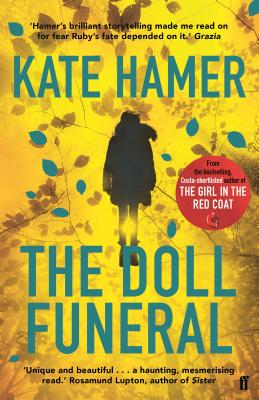 My name is Ruby. I live with Barbara and Mick. They're not my real parents, but they tell me what to do, and what to say. But there are things I won't say. I won't tell them I'm going to hunt for my real parents. I don't say a word about Shadow, who sits on the stairs, or the Wasp Lady I saw. Or that I'm a hunter for lost souls. I'm going to be with my real family. And I won't let anyone stop me.

Kate Hamer grew up in the West Country and Wales. She studied art and worked for a number of years in television. In 2011 she won the Rhys Davies short-story prize and her short stories have appeared in various collections. Her debut novel The Girl in the Red Coat was published in 2015. It was shortlisted for the Costa First Novel Prize, the British Book Industry Awards Debut Fiction Book of the Year, the John Creasey (New Blood) Dagger, and the Wales Book of the Year. It was a Sunday Times bestseller and has been translated into sixteen different languages. Kate now lives with her husband in Cardiff.
Loading...
or
Not Currently Available for Direct Purchase