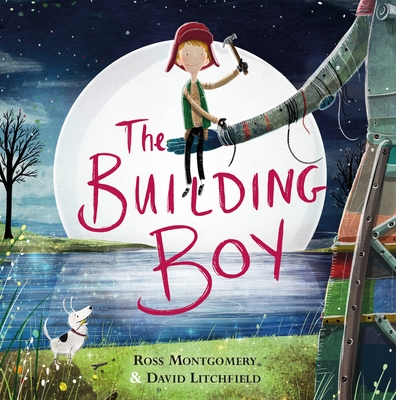 Montgomery's imaginative tale of grief and legacy is refreshingly untethered by logic. Litchfield's illustrations amplify his themes with originality and a warm palette. Sad and sweet. --Kirkus Reviews All at once, it was as if the stars leapt closer. Grandma grabbed the boy, raising him high above the rooftiles on her head. She was alive The boy's grandma was a famous architect. Her garden is still full of old building materials. Unwilling to accept she has gone, the boy builds a giant structure from the bricks and girders he finds. And then ... Grandma comes to life The boy is whisked away on an epic adventure across fields, through oceans and atop roofs. But where is Grandma taking him? Beautiful, thrilling and extremely moving: the extraordinary debut picture book with beautiful illustrations from bestselling illustrator David Lichfield.

Ross Montgomery started writing stories as a teenager, when he should have been doing homework, and continued doing so at university. After graduating, he decided to channel these skills into teaching at a primary school. He wrote his books when he really should have been marking homework. He lives in London with his girlfriend, a cat and many, many dead plants. The Building Boy is his first picture book. David Litchfield lives in Bedfordshire. He first started to draw when he was very young, creating comics for his siblings. Since then David's work has appeared in magazines, newspapers, books, and on T-shirts. He has also exhibited his illustrations in both solo and group shows in the UK, Europe, and America. He is the author/illustrator of the award winning picture book The Bear and the Piano.
Loading...
or
Not Currently Available for Direct Purchase