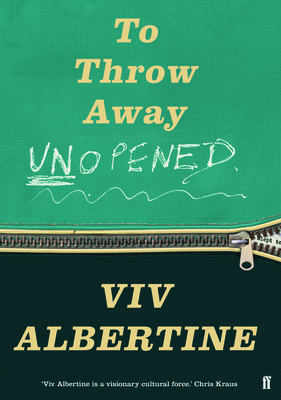 To Throw Away Unopened

NPR BOOK OF THE YEAR AS HEARD ON NPR'S FRESH AIR "Enthusiastically chaotic...on the page she is wry and vibrant..."--New York Times "Brave and engaging."--Kirkus Reviews At the launch party for her memoir Clothes Music Boys in 2014, Viv Albertine received the news her mother was dying. She left the party immediately and spent a few final hours with a woman who had been an enormous presence and force in her life. In the weeks that followed, Viv was left with the task of sorting through her mother's affairs. In that process she came across one fatally curious item: a bag labelled "To throw away unopened". This auspicious moment lies at the heart of Viv Albertine's second book, part memoir, part manifesto, part polemic in which she touches on sex, ageing, feminism (in all its guises) and other conundrums that characterize the 21st century life. It is a bold and unapologetic follow-up to a book which became a sensation by a musician and writer who sits at the heart of the counter-cultural landscape today as a celebrated and feted figure.