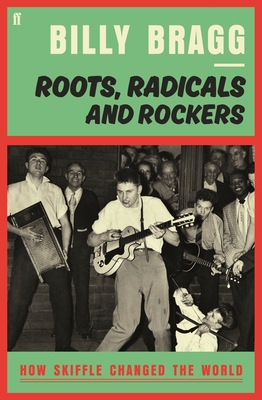 How Skiffle Changed the World

One of Kirkus Reviews Best Music & Entertainment Books of 2017 As heard on NPR's Fresh Air with Terry Gross & seen on PBS Newshour "Nothing short of masterly." -- The Wall Street Journal "A remarkable history of skiffle.... Bragg impresses throughout with engaging prose and painstaking research. He further enlivens the text with personal insights and witty asides that give the material a unique cast few professional writers would dare.... an accomplished work." -- Publishers Weekly (Starred Review) "Superb account of the politically aware, working-class skiffle craze of the 1950s.... Writing with an expert practitioner's appreciation for music, Bragg tells the story of British rock-'n'-roll's forerunner with verve and great intelligence."
-- Kirkus Reviews (Starred Review) Skiffle -- a "do-it-yourself music craze with American jazz, blues, folk, and roots influences - is a story of jazz pilgrims and blues blowers, Teddy Boys and beatnik girls, coffee-bar bohemians and refugees from the McCarthyite witch hunts. Skiffle is reason the guitar came to the forefront of music in the UK and led directly to the British Invasion of the US charts in the 1960s. Emerging from the trad-jazz clubs of the early '50s, skiffle was adopted by the first generation of British "teenagers" -- working class kids who grew up during the dreary, post-war rationing years. Before Skiffle, the pop culture was dominated by crooners and mediated by a stuffy BBC. Lonnie Donegan hit the charts in 1956 with a version of Lead Belly's "Rock Island Line" and soon sales of guitars rocketed from 5,000 to 250,000 a year. Like punk rock that would flourish two decades later, skiffle was home grown: all you needed were three guitar chords and you could form a group, with mates playing tea-chest bass and washboard as a rhythm section. ROOTS, RADICALS AND ROCKERS is the first book to explore the Skiffle phenomenon in depth -- Billy Bragg'fs meticulously researched and joyous account shows how Skiffle sparked a revolution that shaped pop music as we have come to know it.

Stephen William "Billy" Bragg is an English singer-songwriter and left-wing activist. His music blends elements of folk music, punk rock and protest songs, with lyrics that mostly span political or romantic themes. Billy's music is heavily centered on bringing about change and getting the younger generation involved in activist causes. For the entirety of Bragg's 30-year-plus recording career he has been involved with grassroots political movements, and this is often reflected in his lyrics. Bragg said in an interview: "I don't mind being labelled a political songwriter. The thing that troubles me is being dismissed as a political songwriter."