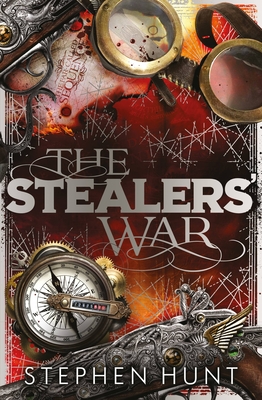 Weyland has been at war. Invaded by a technologically advanced enemy, the cities sacked, and what fragile peace remained torn apart by a civil war.

All anyone should want is a return to peace.

But Jacob Carneham still wants his revenge; and if he can lure the invaders into the mountain he can have it. He can kill them all.

If he does, there may never be peace again.

If he doesn't, Weyland will never be free of the threat of invasion.

The northern horse lords are planning an attack. A future Empress is fighting to save her daughter. Jacob's son is trying to restore peace and stability to Weyland, alongside the rightful King. And behind it all is a greater struggle, which may spell the end for them all . . .


Praise For The Stealers' War…

the ultimate test of a fantasy book is whether you want to read further volumes, and here In Dark Service succeeds magnificently 4*—SFX

The first of a trilogy, it builds a strong foundation for a world that still has so much to explore, with strong and interesting characters that have firmly found their feet in a wonderfully told story—Sci-Fi Now

Stephen Hunt is the author of the bestselling Jackelian series, beginning with THE COURT OF THE AIR, and now the Far-Called series. Born in North America, he now divides his time between Somerset and Madrid, while running his genre-leading website: www.SFcrowsnest.org.uk.
Follow @SFcrowsnest or @s_hunt_author for more information.