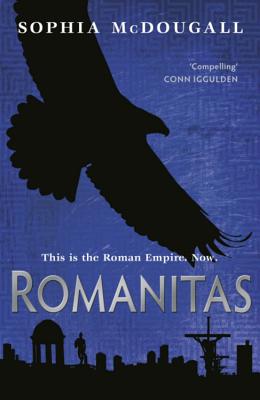 In a parallel modern world, the Roman Empire stretches from India in the East to the Great Wall of Terranova in the West. A runaway slave girl with a strange gift sets out to rescue her brother and seize her freedom, while the young heir to the Imperial throne discovers a plot against his life.
For all three, the only way to survive may shake the Empire to its roots.

Epic in undertaking, Romanitas creates a fascinating world that is both contemporary in tone, and yet about as far removed from the world we live in as it is possible to imagine. McDougall's writing style is fresh and light, and the involving story ensures you'll gobble up the 400 pages in no time, staying eager to find out how the remainder of the trilogy unfolds—Dreamwatch

Perfectly fuses the hope and horror of ancient Rome with that of the modern world—Daniel Godfrey, author of New Pompeii

This is a magnificent series—Adrian Tchaikovsky

Sophia McDougall lives in Hastings, East Sussex and studied English at Oxford. This was her first novel.
Loading...
or support indie stores by buying on
(This book is on backorder)