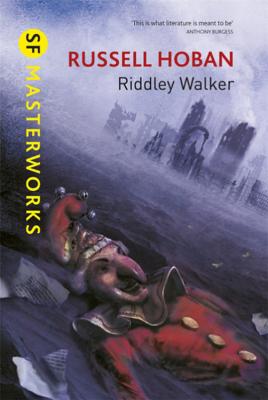 Set in a post-apocalyptic England, RIDDLEY WALKER tells the tale of one twelve year old boy and his journey through the ruins of civilisation. After the death of his father in an accident, Riddley must become a man. But his inquiring mind and strange ways set him apart from his people, and when he discovers a relic of the old time, he sets in motion a chain of events that may well lead to the end of the world (again).

Written in a remarkable and rewarding language, RIDDLEY WALKER is a tour-de-force of imagination, history and psychology. Challenging and rewarding, this is a book that repays rereading again and again. There's a reason why the reviews were so good, and why so many authors cite it as an inspiration. It is, quite frankly, a masterpiece.

Funny, terrible, haunting and unsettling, this book is a masterpiece—The Observer

This is what literature is meant to be - exploration without fear

This unjustly forgotten 1980 novel is unlike anything else: Its portrait of a world after a nuclear holocaust - the explosion of the "1 Big 1" - is written in language that's brilliantly fractured, as if a bomb has exploded there as well.

Russell Hoban (1925 - 2011)
Russell Hoban's parents were immigrants from the Ukraine. His father was the advertising manager of a newspaper, as well as the director of a Philadelphia drama guild. Russell served in the US infantry during the Second World War. After the war he taught art in New York and Connecticut. His first novel was published in 1958 and he has now produced more than 50 books for adults and children. In 1969, he moved to London where he lived for over forty years until his death in December 2011.