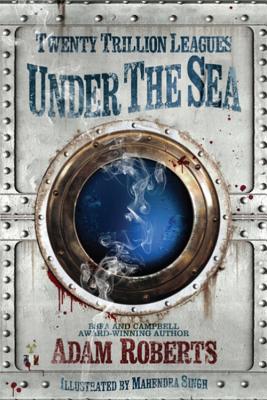 Twenty Trillion Leagues Under the Sea

It is 1958 and France's first nuclear submarine, "Plongeur," leaves port for the first of its sea trials. On board, gathered together for the first time, are one of the Navy's most experienced captains and a tiny skeleton crew of sailors, engineers, and scientists. The "Plongeur" makes her first dive and goes down, and down and down. Out of control, the submarine plummets to a depth where the pressure will crush her hull, killing everyone on board, and beyond. The pressure builds, the hull protests, the crew prepare for death, the boat reaches the bottom of the sea and finds nothing. Her final dive continues, the pressure begins to relent, but the depth guage is useless. They have gone miles down. Hundreds of miles, thousands, and so it goes on. Onboard the crew succumb to madness, betrayal, religious mania, and murder. Has the "Plongeur "left the limits of our world and gone elsewhere? Contains 33 full page pen and ink illustrations.

Adam Roberts is a novelist whose titles include "Adam Robots," "By Light Alone," "The Dragon with the Girl Tattoo," "Gradisil," "I Am Scrooge," "JackGlass," "New Model Army," "Salt," "Swiftly," and "Yellow Blue Tibia." His work has been nominated for the Arthur C. Clarke Award and the Philip K. Dick Award. Mahendra Singh is a freelance illustrator whose Melville Houseillustrated edition of "The" "Hunting of the Snark"waspraised by "LibraryJournal," the"New Yorker," "Salon.com," and" Shelf Awareness.""
Loading...
or support indie stores by buying on
(This book is on backorder)