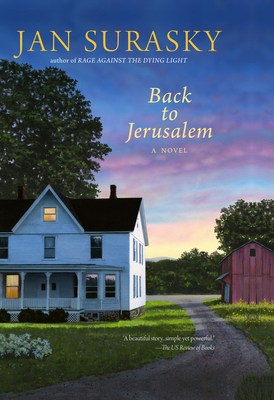 In the 1970s New York farm girl Jenny Thompson ignores the love of her gentle Mennonite neighbor Jake Martin whose friendship she has cherished to comply with her bitter, overbearing social-climbing mother’s wishes for her to marry the richest and most popular boy in town. When her marriage ends in divorce she takes her toddler son to New York city where she finds success in business and the art world. When fate intervenes to reconnect her with Jake, now a high-powered lawyer, two decades later she must choose between heady success and the only love she has ever known.

Beautifully and lyrically written against a backdrop of country dogwoods and meadows and the excitement of fast-paced city life Back to Jerusalem is a vivid and passionate illustration of the complexities of second chances.


Praise For Back to Jerusalem…

"Forbidden love and long-held secrets abound . . . a quiet but moving story of one woman's reclaiming her life.”  —Kirkus Reviews

"Surasky has crafted a beautiful story that is simple yet powerful; a sweeping fast read”  —The US Review of Books

Donation of both hard cover and paperback copies of Back to Jerusalem to local and regional libraries. —Library Donation Program, Sandalwood Press

Print advertisement for Back to Jerusalem featured in UpHere Magazine, an award-winning magazine with the largest circulation in Northern Canada. 58% of distribution is in southern Canada and around the world, and the balance of 42% reaches every community in the northern territories. —Print Advertisement, UpHere Magazine

Flyer featuring Back to Jerusalem sent to bookstores in U.S. and Canada —Bookstore Flyer Program

Donation of copies of Back to Jerusalem to local and regional libraries. Stimulated discussion with patrons and librarians about the book, generating 100% interest and positive feedback along with constant and active circulation of the book. —Library Donation Program

Color print advertisement with book image and description of Back to Jerusalem, to be featured in the Spring issue of Newfoundland Quarterly. —http://nqonline.ca

Jan Surasky is a former writer for a San Francisco daily newspaper. Her many articles and short stories have been published in national and regional magazines and newspapers. Her award-winning novels include Rage Against the Dying Light, Back to Jerusalem, and The Lilac Bush is Blooming. She lives in upstate New York.
Loading...
or
Not Currently Available for Direct Purchase