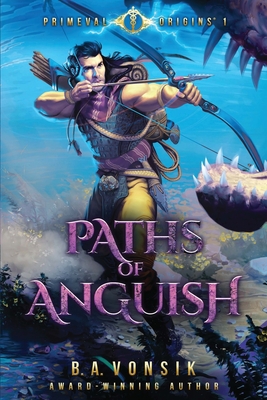 Multiple Award-Winning Primeval Origins: Paths of Anguish (2nd Edition) is the first book of the epic origins story of mankind, our heavenly hosts, and the eternal war between good and evil where all is revealed, through characters both past and present, and tellings of humanity's heroic struggles against terrible tyrannies, deadly dinosaurs, and ancient gods as the origins of our End Times is revealed, answering the question, "What if all of our myths and legends are true?"

Myths and Legends...just fables and fantasies for those taught to scoff at them is understood, as I was taught when a graduate student in the sciences; scorn and ridicule the forbidden. Myths are just...myths. Legends are just...legends. Then, I discovered different, in a South American dig where my life went upside down after finding what should not be with what we thought we knew so much about. My consciousness, my Light, plunged through a maelstrom bound to those of our undiscovered history. I witnessed through the eyes of ancient warriors, Rogaan and others, a wondrous human civilization of old, grand beasts and dinosaurs, and celestial gods of myth in what the modern Hopi and Maya branded our First World-Age. An age deep in blood and conflict born of gods and new man covetous of true powers and self-motivations loosing upon their world tyrannies, energy forces...sorceries, and abominations affronting Creation. Sealing the fates of the age, sword-messengers, warrior angels, risen new to bring forth the Harbinger of Creation's Judgments, slayers of civilizations...both of men and gods, the Horsemen. I am bound to them. In the here and now, standing at the precipice at the end of mankind's Fourth World-Age, I fear what is to come from the others...the Horsemen of Prophecy. And yet, I have hope for what follows. As our ancients did in tablets of clay teaching us our undiscovered past, I Nikki, now share these steel bound epics with you before the sounding of the trumpets.