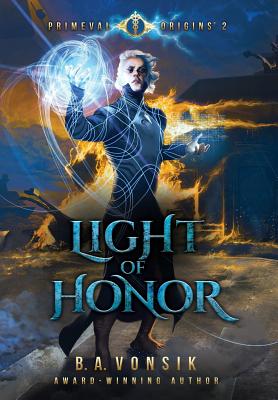 Multiple-award winning Primeval Origins: Light of Honor is the second book in this epic Fantasy/SciFi story telling of the origins of mankind, our heavenly hosts, and of the eternal war between the goodness of the Light and the evils of Darkness. Join in the grand adventure revealing humanity's heroic struggles against terrible tyrannies, deadly dinosaurs, beasts of old, and ancient gods answering the question, "What if all of our myths and legends are true?" Book 2 in the Primeval Origins epic series.

Fleeing across the sea from enemies familiar and unknown, the crew of the Wind Runner and I fight for our lives as we struggle to keep safe our strange and ancient cargo, the unconscious Rogaan and Aren. We have need the help of these warriors of old as we battle deadly Tyr super-soldiers of the New World Order, now commanded by the forces of the Crescent Moon, intent on taking our ancient cargo for themselves. I suffer horribly the wrath of the Tyr when protecting the unrisen Horsemen, hurling me to the brink of death and back into the ancient world of mankind's first civilization, reliving the past through the eyes of the then young and aspiring warrior Rogaan and the mystic Aren. As my Light, again, plunges into the maelstrom of our deep past experiencing a culture both simultaneously primitive and advanced, as our ancient ancestors struggle against self-corruptions and unseen powers born of jealous entitlements by their celestial gods and unknown intelligences. In these remembrances, I am witness to terrible injustices and impossible trials levied by the covetous tyrannies against Rogaan, Aren, and many others. In the here and now, I find rising deep questions about humanity's origins and the seemingly eternal battle between the goodness of the Light and the selfish evils of the Darkness. I, Nikki, now standing at the precipice at the end of mankind's Fourth World-Age, bare testimony of our undiscovered history, in these blue steel epics, revealing the origins of the Horsemen of Prophecy... before the sounding of the trumpets.