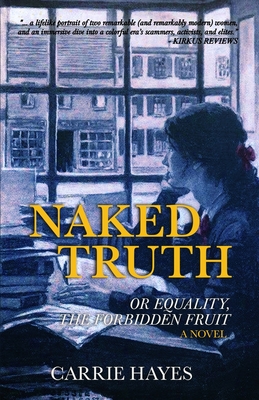 or Equality, the Forbidden Fruit

"SOMETIMES, IT IS NOT ENOUGH TO BE THE NEWS, SOMETMES, YOU HAVE TO MAKE THE NEWS AS WELL"

It is 1868 and spiritualist TENNESSEE CLAFLIN is smart, sexy and sometimes clairvoyant. But it is her sister, VICTORIA WOODHULL who is going to make history when she becomes the first woman to run for President of the United States.

It starts with the seduction of the richest man in America. Next, they'll take New York City and the suffragist movement by storm, because together, Tennessee and Victoria are a force of Nature. Boldly ambitious, they stop at nothing, while they brush shoulders with Harriet Beecher Stowe and Susan B. Anthony, using enough chutzpah to make a lady blush.

That is, until their backstabbing family takes them to court. When their carefully spun lives unravel, out in public and in the Press, Tennessee and Victoria become the media's object of ridicule and they are pilliored with contempt.

"Nothing more than a shameless prostitute and a Negro." The Guard, Eugene, Oregon, 1872

Told from shifting points of view and using actual news reportage from the era, Naked Truth gives a riveting inside look into the struggle for women's rights after the Civil War.

Perfect for book clubs and fans of historical fiction.

"The book is based on a true story, and Hayes writes with such care and authenticity, that the reader will likely be unsure where the history ends and the fiction begins."-KIRKUS REVIEWS