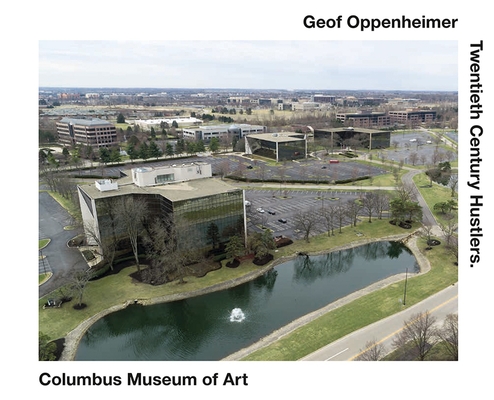 Geof Oppenheimer: Twentieth Century Hustlers. is an exhibition catalog published to accompany a 2020 video installation at the Columbus Museum of Art. The catalog includes photos of the exhibit along with essays by Tyler Cann, Anita Chari, and Richard Sennett.

Commissioned by the Columbus Museum of Art and shot in Dublin and Whitehall, Ohio, Geof Oppenheimer’s two-part video installation, Twentieth Century Hustlers., ruminates on how the post-industrial world has affected the physical, technological, and psychological conditions of labor.

Oppenheimer, a Chicago-based artist, has had work exhibited nationally and internationally which has been written about in Art in America, the New Yorker, and the Wall Street Journal.

In the first chapter of Oppenheimer’s video, a strange pink glow suffuses a late-model Lincoln Town Car as it glides between the mirrored buildings of an anonymous office park. Among the three archetypal characters in the back seat, business jargon becomes oracular poetry, and the powerful seem overtaken by a situation they do not fully comprehend.

The second chapter, set in a café, relays a middle-aged man’s enigmatic story of displacement, loss, and what it means to strive in an unstable world. The scene borrows structures and language from Ohio Impromptu, a short play by Samuel Beckett. Twentieth Century Hustlers. transposes Beckett’s tale of estranged love into one about the nameless, fearful symptoms of our economic and social reality.

Geof Oppenheimer’s work has been exhibited nationally and internationally at a variety of venues, including Mary and Leigh Block Museum of Art, PS1/MOMA, The Contemporary Museum, Baltimore; The Museum of Contemporary Art, Chicago, SITE Santa Fe, The Indianapolis Museum of Art, The Aspen Art Museum, The 4th Athens Biennale and CAB Art Center, Brussels. His work has been the subject of published writings in Art in America, The Wall Street Journal, The Chicago Tribune and The New Yorker. He received an MFA from the University of California, Berkeley and is associate professor of practice in the Department of Visual Arts at the University of Chicago.

“At a moment when corporations are regarded as people too, every entity has had to become a hustler. The first chapter of Twentieth Century Hustlers. shows us the system in its throes, the second underlines its effect on human lives. But hustling as he depicts it is not the only way to labor, and Oppenheimer’s installation is perhaps best understood as a warning lest we forget the craft of being human.”—from the essay by Richard Sennett
or support indie stores by buying on
(This book is on backorder)
Copyright © 2020 American Booksellers Association