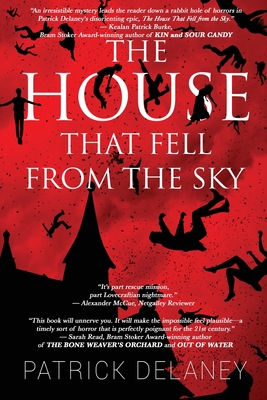 The House that fell from the Sky

vWhen twenty-nine-year-old Scarlett Vantassel comes to the conclusion that her life doesn't resemble any of the things she actually wanted for herself, she drops out of school and moves back home, attempting to reconnect with the people she left behind. But a shadow falls over her return one early October morning when a sinister house miraculously appears in the center of the city, sparking a media frenzy that attracts attention nationwide.

Soon after the newspapers label it, "The House that Fell from the Sky," Scarlett's childhood friend Hannah becomes obsessed with the idea that the house holds the key to discovering whether there really is life after death. Undeterred by her friends' numerous warnings, Hannah becomes increasingly consumed with the desire to enter the house, convinced it would allow her to reconnect with her recently deceased mother.   Despite a series of escalating events suggesting that the house may be more dangerous than anyone ever thought possible, a privately owned company seizes control of the property and hosts a lottery to lure the city's residents, promising the winners a large cash reward if they dare to enter the house.   To Scarlett's horror, Hannah uses her vast wealth to secure a spot among the winners to gain access to the house. Now, it's up to Scarlett, her older brother Tommy, and her friend Jackson to face their fears and journey into a place where nothing is ever quite as it seems, and decide if they can help a friend in need, or if Hannah truly is lost.