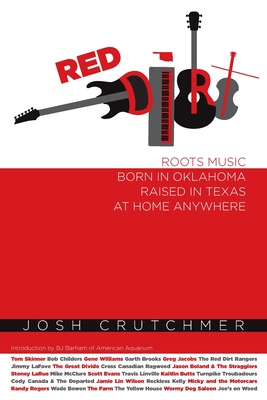 Red Dirt tells the story of a roots music scene that grabbed a foothold in Stillwater, Oklahoma, and spread across the country. The scene took roots in the late 1970s as an outlet for college-town hippies. The scene gave rise to Garth Brooks, who credits it with helping his early rise to prominence. Later, The Great Divide, Cross Canadian Ragweed, Jason Boland and the Stragglers and Stoney LaRue rose from the scene to become regional stars, including a major record deal for The Divide and Ragweed. They were followed by the Turnpike Troubadours, who carried the scene to its highest heights in the late 2010s. Using exclusive interviews and unprecedented access to the artists themselves, Red Dirt tells their story. The book also explains how key relationships with non-Red Dirt artists like Reckless Kelly, Randy Rogers and Wade Bowen helped Red Dirt gain acceptance and then immense popularity across Texas, which claims a burgeoning original-music scene of its own.

"Crutchmer has written the definitive book on Red Dirt music."

Josh Crutchmer is an editor at The New York Times and has been a part of Oklahoma's Red Dirt Music scene since 2000. Crutchmer covered the rise, peak and breakup of Cross Canadian Ragweed, and has also written extensively about influential country music superstars. He wrote an appraisal for the late Merle Haggard for the Cleveland Plain Dealer and one for the late George Jones for The Nashville City Paper.
Loading...
or
Not Currently Available for Direct Purchase