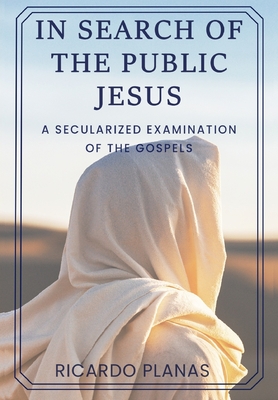 In Search of the Public Jesus

A Secularized Examination of the Gospels

My work took me to study the relevance of Christianity in today's highly secularized world by viewing the faith from the standpoint of its primary sources, the Gospels, and their main protagonist, Jesus.

The objective is to allow the texts to uncover the public Jesus by grouping passages into over one hundred categories. Proceeding in this manner allows the reader to notice incongruences and contradictions in events attributed to Jesus, making it more difficult to accept the texts as the result of divine revelation. The book does not deny such a possibility; it simply does not affirm it, which in itself poses a problem for the faith. This is coming from someone who is a Christian believer.

There are four key elements in the book.

First, there is an explanation of the problems Christianity faces (chapters 1-3) including a testing hypothesis (chapter 1).

Second, I provide an explanation of the methodology used for the quantitative and the qualitative parts (chapter 4 and the appendix). The quantitative aspect of this work answers the question, what are the Gospels about; the issues it deals with the most, and those it ignores or pays scant attention to.

Third, it presents the first quantitative and qualitative profile of Jesus ever attempted based on the texts alone (chapter 5).

Fourth, the categories, over one hundred of them. Content analysis suggests that any written or oral communication can be dissected to uncover what lies behind the author's motives, which naturally affects the way the texts are interpreted. This is done by rearranging the texts into specific categories that are relevant to the Christian faith. Instead of the traditional approaches of simply selecting favorable quotes to make a point for or against the faith, the method used in this book is as different as day and night.

Rereading the texts from a different vantage point allows a more realistic image of the public Jesus to emerge than that provided by apologists or detractors of the Christian faith; an image of who he was at the time, beyond what people might think, feel, or believe he is today.