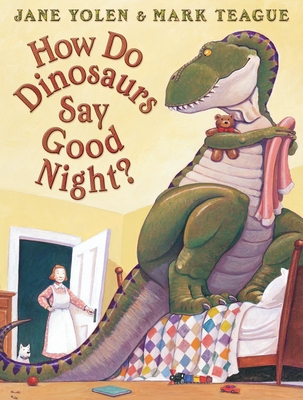 A playful peek into the homes of dinosaur babies and their parents at bedtime!
How do dinosaurs say good night?

Brimming with humor and familiar good-night antics, here is a playful peek into the homes of dinosaur children and their parents at bedtime. Perfect for sharing and reading aloud, this is one nighttime book your own little dinosaur will want to read again and again.

Jane Yolen is the beloved author of more than 365 books for children and adults, including award-winning picture books, fiction, nonfiction, and poetry. In addition to two Nebula Awards and a National Book Award nomination, she has received a Golden Kite from SCBWI, three Mythopoeic Fantasy Awards, and the California Young Reader Medal. Yolen’s How Do Dinosaurs Say Good Night? was an ALA Notable Book and a Christopher Medal winner. The book has gone on to become a widely popular bestselling series with over 15 million copies in print. She lives in Western Massachusetts.

Mark Teague is the internationally bestselling illustrator (and author) of more than 50 books for children. His numerous awards and honors include the Book Sense Book of the Year Award and the Christopher Medal. He has illustrated 12 full-size books and 11 board books in the widely successful How Do Dinosaurs...? series. He is the author of the popular Dear Mrs. LaRue, Firehouse!, and Jack and the Beanstalk and the French Fries. He lives in New York State.

*Yolen, Jane. Illus. by Teague, Mark. How Do Dinosaurs Say Goodnight? Apr. 2000. 40p.
Scholastic/Blue Sky,$15.95 (0-590-31681-8).
Age 4-6. The text is sweet and simple-just right for the wonderful pictures that really make this picture book spe- cial. Teague's art takes dinosaurs out of their usual con- text and plops them into bed (a rather comical fit) for a sleepy-time tale with a difference. Endpapers introduce the critter cast in all their gorgeous glory: tyrannosaurus rex, dimetrodon, and more, in vivid, yet still earthbound colors. Prima donna dinos, they yawn and fuss and throw toys about, procrastinating Oust like real kids) any way they can as human Moms and Dads, ready to put "baby" to bed, look on in various stages of impatience, anger, and surprise. The whimsical expressions on the "children's" faces give solid clues to the joke. By cleverly varying his perspectives, Teague adds dramatic punch to the pic- tures-readers watch from above as one behemoth baby whips its neck from side to side; they watch from below when another stamps its huge feet; and they're face to face with one snoozing T-rex hugging its teddy bear close. Alert lookers will notice the dino's name incorporated somewhere into each picture-pteranodon is neatly spelled out in blocks on the floor. A delight from start to finish; better buy more than one. -Stephanie Zvirin
or
Buy Here
Copyright © 2020 American Booksellers Association