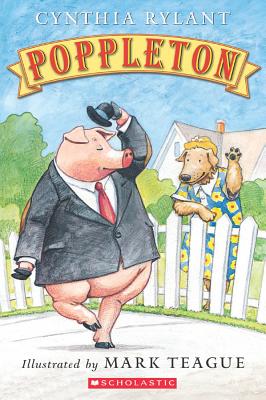 Poppleton the pig makes a friend, reads a library book about adventure, and helps a sick friend get better.

CYNTHIA RYLANT is the acclaimed author of many beloved books for young people, including the Mr. Putter & Tabby series, the novel Missing May, which received the Newbery Medal, and the Little Whistle series. She lives on an island in Puget Sound, Washington. ARTHUR HOWARD is best known as the illustrator of Cynthia Rylant's Mr. Putter & Tabby series. He is also the illustrator of Kathi Appelt's Bubba and Beau series and has written and illustrated three picture books of his own: Hoodwinked; When I Was Five, an ABA's Pick of the Lists and a Crayola Kids Best Book; and Cosmo Zooms, an IRA-CBC Children's Choice. He lives in New York City.

Cynthia Rylant has written more than 100 books, including Dog Heaven, Cat Heaven, and the Newbery Medal-winning novel Missing May. She lives with her pets in Oregon.
Loading...
or
Not Currently Available for Direct Purchase