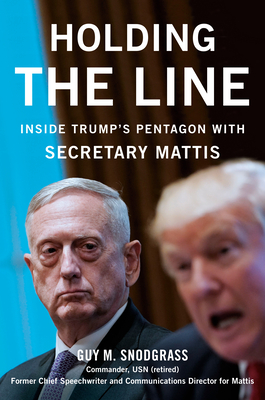 Inside Trump's Pentagon with Secretary Mattis

"This is the memoir America wishes Jim Mattis had written." —The Washington Post

An insider's sometimes shocking account of how Defense Secretary James Mattis led the US military through global challenges while serving as a crucial check on the Trump Administration.

For nearly two years as Trump's Secretary of Defense, General James Mattis maintained a complicated relationship with the President. A lifelong Marine widely considered to be one of America's greatest generals, Mattis was committed to keeping America safe. Yet he served a President whose actions were frequently unpredictable and impulsive with far-reaching consequences.

Often described as the administration's "adult in the room," Mattis has said very little about his difficult role, and since his resignation has kept his views of the President and his policies private. Now, Mattis's former chief speechwriter and communications director, Guy M. Snodgrass, brings readers behind that curtain. Drawing on his seventeen months working with Mattis, Snodgrass reveals how one of the nation's greatest generals walked a political tightrope while leading the world's most powerful military.

Snodgrass gives us a fly-on-the-wall view as Mattis...
•  Reacted when learning about major policy decisions via Twitter rather than from the White House.
•  Minimized the damage done to our allies and diplomatic partners.
•  Slow-rolled some of Trump's most controversial measures, with no intention of following through.

As the first book written by an insider with firsthand knowledge of key decisions and moments in history, Holding the Line is a must-read for those who care about the presidency and America's national security. It's filled with never-before-told stories that will both alarm and reassure, a testament to the quiet and steady efforts of General Mattis and the dedicated men and women he led at the Department of Defense.

Praise For Holding the Line: Inside Trump's Pentagon with Secretary Mattis…

"This is the memoir America wishes Jim Mattis had written."
—The Washington Post

“For all of you who've been waiting for a tell-all account of Jim Mattis' 710 days as President Trump's first Pentagon chief, that book has now been written."
—NPR

“Snodgrass’s account of the wild briefing provides a taste of his on-the-record, eyewitness candor about the two years Mattis spent trying to keep things from spinning out of control—a candor readers will not find in the former defense secretary’s own circumspect memoir.…Snodgrass…has stepped forward to fill some of the vacuum created by Mattis’s silence.…Snodgrass saw more than enough for his memoir to take its place in the growing annals of government dysfunction.”
—NYT

"[T]his book is a graduate course in understanding the dynamics and processes at the highest level of the U.S. military."
—CIMSEC

“[A] fly-on-the-wall view of how the retired general operated at the Pentagon amid myriad crises, from issues with North Korea and Iran to trying to get on the same page with a chaotic White House.”
—Task & Purpose

“[A] must-read (if not a cautionary tale) for any professionals—military or otherwise—who desire access to the biggest levers of power.”
—Military.com

Guy "Bus" Snodgrass recently served as director of communications and chief speechwriter to Secretary of Defense James Mattis. A former naval aviator and F/A-18 pilot, he served as a commanding officer of a fighter squadron based in Japan, a TOPGUN instructor, and a combat pilot over the skies of Iraq as part of his twenty-year navy career. Today he is the founder and CEO of Defense Analytics, a strategic consulting and advisory firm.
Loading...
or
Not Currently Available for Direct Purchase