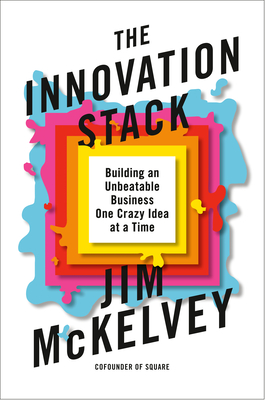 Building an Unbeatable Business One Crazy Idea at a Time

From the cofounder of Square, an inspiring and entertaining account of what it means to be a true entrepreneur and what it takes to build a resilient, world-changing company

In 2009, a St. Louis glassblowing artist and recovering computer scientist named Jim McKelvey lost a sale because he couldn't accept American Express cards. Frustrated by the high costs and difficulty of accepting credit card payments, McKelvey joined his friend Jack Dorsey (the cofounder of Twitter) to launch Square, a startup that would enable small merchants to accept credit card payments on their mobile phones. With no expertise or experience in the world of payments, they approached the problem of credit cards with a new perspective, questioning the industry's assumptions, experimenting and innovating their way through early challenges, and achieving widespread adoption from merchants small and large.

But just as Square was taking off, Amazon launched a similar product, marketed it aggressively, and undercut Square on price. For most ordinary startups, this would have spelled the end. Instead, less than a year later, Amazon was in retreat and soon discontinued its service. How did Square beat the most dangerous company on the planet? Was it just luck? These questions motivated McKelvey to study what Square had done differently from all the other companies Amazon had killed. He eventually found the key: a strategy he calls the Innovation Stack.

McKelvey's fascinating and humorous stories of Square's early days are blended with historical examples of other world-changing companies built on the Innovation Stack to reveal a pattern of ground-breaking, competition-proof entrepreneurship that is rare but repeatable.

The Innovation Stack is a thrilling business narrative that's much bigger than the story of Square. It is an irreverent first-person look inside the world of entrepreneurship, and a call to action for all of us to find the entrepreneur within ourselves and identify and fix unsolved problems--one crazy idea at a time.

Praise For The Innovation Stack: Building an Unbeatable Business One Crazy Idea at a Time…

“McKelvey tells the remarkable story of how with Square, he started a business that would transform an industry, along the way unlocking a whole new model for innovation. An inspiring call to action for entrepreneurs who want to tackle problems that affect our everyday lives, with perseverance and some crazy ideas.” —Steve Case, chairman and CEO of Revolution, cofounder of AOL, and author of The Third Wave: An Entrepreneur's Vision of the Future

“The Innovation Stack is a deeply useful book about the characteristics of successful companies and how and why to build one, complete with inspiring case studies that literally span centuries. But it’s also much more than that: a witty, humane exploration of living in the complicated, inequitable world we all share and are working to make it less so.” —Eric Ries, entrepreneur and bestselling author of The Lean Startup

“Who can say they went up against Amazon—and won? Jim McKelvey can, and this book tells how.” —Peter Thiel, entrepreneur, investor, and author of Zero to One

“Growing up in the Show Me State—aka Missouri—made me skeptical of everything . . . especially Jim McKelvey. I’d say more but I’m out of charact” —Jack Dorsey, cofounder and CEO of Twitter and Square

James McKelvey is a serial entrepreneur, inventor, philanthropist and artist.
He is the cofounder of Square, was chairman of its board until 2010, and still serves on the Board of Directors. In 2011, his iconic card reader design was displayed at the Museum of Modern Art.
In 2016, McKelvey founded Invisibly, an ambitious project to rewire the economics of online content.
In 2017, he was appointed as an Independent Director of the St. Louis Federal Reserve.