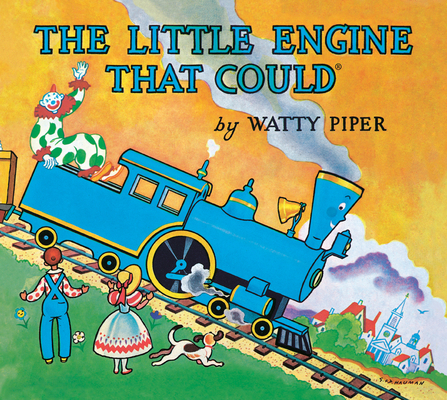 The Little Engine That Could

The special anniversary edition of The Little Engine That Could™ contains the entire text and original artwork. A laminated jacket, gold-stamped cloth binding, and colored endpapers complete the deluxe package. Young readers, as well as parents and grandparents, will treasure the story of the blue locomotive who exemplifies the power of positive thinking.

Praise For The Little Engine That Could: A Mini Edition…

Praise The Little Engine That Could illustrated by Loren Long

* “Long . . . adds a lushness to the spreads and injects even more personality into the characters. Both faithful fans and newcomers will enjoy this triumphant ride and eagerly climb aboard for repeat excursions.” —Publishers Weekly, starred review

* “Long has enriched this new edition with bountiful illustrations that take their palette and inspiration from the original, but are greatly enhanced by imagination and inventiveness.” —Kirkus Reviews, starred review

Loren Long has putt puff puttedy chuffed his way all over the bestseller lists with such titles as Otis, Otis and the Tornado, Otis and the Puppy, An Otis Christmas, Drummer Boy, Toy Boat by Randall de Sève, and Mr. Peabody’s Apples by Madonna. He’s also had the opportunity to modernize the classic The Little Engine That Could by Watty Piper and had the distinct honor of illustrating Of Thee I Sing by President Barack Obama.

A graduate of the American Academy of Art in Chicago, Loren lives in Ohio with his wife, Tracy, and their two sons.
Loading...
or support indie stores by buying on