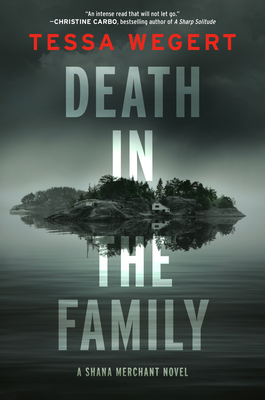 Death in the Family (A Shana Merchant Novel #1)

A storm-struck island. A blood-soaked bed. A missing man. In this captivating mystery that's perfect for fans of Knives Out, Senior Investigator Shana Merchant discovers that murder is a family affair.

But as a nor'easter bears down on her new territory, Shana and fellow investigator Tim Wellington receive a call about a man missing on a private island. Shana and Tim travel to the isolated island owned by the wealthy Sinclair family to question the witnesses. They arrive to find blood on the scene and a house full of Sinclair family and friends on edge.

While Tim guesses they're dealing with a runaway case, Shana is convinced that they have a murder on their hands. As the gale intensifies outside, she starts conducting interviews and discovers the Sinclairs and their guests are crawling with dark and dangerous secrets.

Trapped on the island by the raging storm with only Tim whose reliability is thrown into question, the increasingly restless suspects, and her own trauma-fueled flashbacks for company, Shana will have to trust the one person her abduction destroyed her faith in—herself. But time is ticking down, because if Shana's right, a killer is in their midst and as the pressure mounts, so do the odds that they'll strike again.

Praise For Death in the Family (A Shana Merchant Novel #1)…

"Death in the Family is a terrific suspense novel in the classic, Agatha Christie tradition. With a masterful hand, Tessa Wegert combines slices of serial-killer thriller with a locked-room mystery to guide her readers through an atmospheric and riveting story full of fascinating characters and complex relationships...Simultaneously claustrophobic and hauntingly beautiful. Wegert offers an intense read that will grab your attention and not let go, even after the last page is turned."—Christine Carbo, bestselling author of A Sharp Solitude

"Intricate plotting and a razor-sharp narration keep the pages turning in this up-all-night murder mystery. Menacing and atmospheric, Death in the Family will have you on the edge of your seat rooting for Detective Shana Merchant to uncover the truth and triumph over the scars of her own dark past. A tense, riveting read!" —Wendy Walker, USA Today bestselling author of The Night Before

“A deliciously complicated locked-room mystery that would make Agatha Christie proud.  Add a savvy sleuth battling her own demons and the result is an up-to-date and thrilling ride. Death in the Family definitely deserves a place on your must-read list.” –Margaret Coel, New York Times bestselling author of Winter’s Child

“Tessa Wegert’s Death in the Family assembles delicious ingredients—isolation, a ticking clock, family secrets—and creates a mystery at once familiar and distinctly her own. Bloody good comfort food.”—Andrew Pyper, bestselling author of The Homecoming and The Demonologist

"Death In The Family is an ominous, compelling take on the locked-room mystery, teeming with old secrets, twisty motives, and a prickly, damaged detective determined to prove herself. Tessa Wegert expertly ratchets up the tension, turning an idyllic island claustrophobic as the characters’ tangled pasts unravel and the killer closes in. Compulsively readable and utterly satisfying, with an ending that will leave you desperate for Shana's next case."–Erica O’Rourke, author Dissonance and Time of Death as Lucy Kerr

“This locked-room thriller has all of the requisite tangled motives and deductive crime-solving, along with a riveting introduction to edgy survivor Shana and Tim, her steady, easygoing foil.”—Booklist

Tessa Wegert is a Canadian expat, journalist, and former digital media strategist. Her business and marketing articles have appeared in such publications as Forbes, The Huffington Post, Adweek, and The Economist. Death in the Family is her first novel.
Loading...
or
Not Currently Available for Direct Purchase