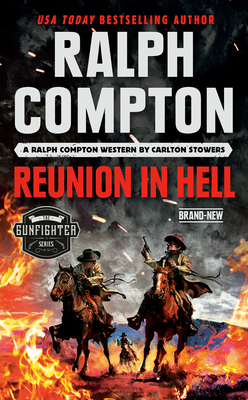 A farmer is pulled into the world of outlaws when his estranged brother turns up dead in this new Ralph Compton Western.

Brothers Clay and Cal Breckenridge, sons of a hardscrabble East Texas farmer, never did see eye to eye. Clay, the eldest, returned home after the Civil War to help his father run the family farm; Cal deserted his military post and disappeared into a new life with a new name. Everyone knew who was the good son and who was the bad.

Clay had almost forgotten his wayward brother until the morning a limping horse approaches the farm with young Cal Breckenridge’s body slumped in the saddle, shot in the back.

Vowing to avenge Cal’s death, Clay sets off on a perilous journey across the West to find the man responsible and bring him to justice—and take down an outlaw enterprise in the process.

Ralph Compton stood six foot eight without his boots. He worked as a musician, a radio announcer, a songwriter, and a newspaper columnist. His first novel, The Goodnight Trail, was a finalist for the Western Writers of America Medicine Pipe Bearer Award for best debut novel. He was the USA Today bestselling author of the Trail of the Gunfighter series, the Border Empire series, the Sundown Riders series, and the Trail Drive series, among others.

Carlton Stowers is an award-winning journalist and the author of more than two dozen books, including Comanche Trail, which was named a finalist for both the Western Fictioneers and the Texas Institute of Letters best first novel awards. He lives in Cedar Hill, Texas.
Loading...
or support indie stores by buying on