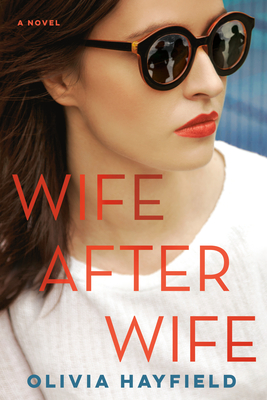 A modern take on the life and marriages of Henry VIII, if he were a 21st century womanizing media mogul rather than the king of England.

Master of the universe Harry Rose is head of the Rose Corporation, number eighteen on the Forbes rich list, and recently married to wife number six. But in 2018, his perfect world is about to come crashing to the ground. His business is in the spotlight--and not in a good way--and his love life is under scrutiny. Because behind a glittering curtain of lavish parties, gorgeous homes, and a media empire is a tale worthy of any tabloid.

Olivia Hayfield is the pseudonym of British author Sue Copsey. Sue is usually in her office editing other people's books, while Olivia is often in her writing hut at the bottom of the garden. After several years in London Zoo's press office, Sue became an editor at Dorling Kindersley. She later moved to New Zealand, where she continues to work in publishing. Sue has written several children's books, including The Ghosts of Tarawera, which was a Storylines Children's Literature Trust Notable Book. Wife After Wife is her first adult novel. She is married with two children.

Praise For Wife After Wife…

Praise for Wife After Wife

“You don’t have to be a Tudor aficionado to adore Wife After Wife, however, those in the know will be especially delighted with this modern-day retelling of the six wives of Henry VIII. For all others, Hayfield’s clever novel is a delicious read for anyone looking to sink into a big juicy story about love, lust, betrayal and other unfortunate consequences of the heart.”—Renee Rosen, bestselling author of Park Avenue Summer

"This page-turner will delight both Tudorphiles and readers who love a dishy tellallabout rich people behaving badly."—Booklist

"This story will resonate with readers, even those less familiar with British royal history. For fans of updated Jane Austen books, such as Soniah Kamal’s Unmarriageable and Curtis Sittenfeld’s Eligible, and those who are ready to branch out.” --Library Journal
or
Buy Here
Copyright © 2020 American Booksellers Association